The Squeeze/Aimee Mann show last night at the Pageant was fantastic. Instead of writing a straightforward review, I'm just going to write ten things/observations about the concert. All words and photos by Annie Zaleski (click for larger images); entire Flickr set here. Do not use without permission.

1. What stood out most during the show was a sense of timelessness. The concert didn't feel like the typical reunion tour; the energy, enthusiasm and tight musicianship pointed more toward a veteran band who never quit touring. (Since Glenn Tilbrook and Chris Difford have solo records and tours under their belts, that makes sense.) More important, most of the songs played sounded as though they were written yesterday. It didn't feel like seeing a thirty-year-old band. During the show, I kept flashing back to other power-pop-indebted bands I've seen over the years -- and realized how influential Squeeze (perhaps even unwittingly) has been.

2. Highlights were many -- and included Argybargy's synth-driven space-wave "Separate Beds," an askew "If I Didn't Love You" and classic single "Pulling Mussels (From the Shell)" -- the final song of the night, and much more upbeat and electric than its studio version. East Side Story album cut "Piccadilly" and a punkish, brisker "Is That Love" also stood out, as did Cool for Cats' wistful, melodic "Up the Junction" and loping "Goodbye Girl." It goes without saying that stand-alone single "Annie, Get Your Gun" -- which also was faster, sharper and rawer -- was a highlight.

3. "Slap and Tickle" -- the first song of the encore -- is arguably the band's weirdest single, but the rendition last night was absolutely fantastic. Greyscale vintage synths, rocket-fueled guitars and pinpoint harmonies equaled a heavy, glammed-out, rocked-out experience. The inspiration this song had on Duran Duran and other New Romantics, along with its place among the proto-industrial and alien synthpop acts, became obvious.

4. Chris Difford indeed seemed to be having tons of fun onstage. He frequently did a little soft-shoe dance (sometimes in tandem with bassist John Bentley), smiled all the time and basically goofed around like a big kid. His droll lyrical reading of "Cool for Cats" was particularly fun.

5. Keyboardist Stephen Large -- from Tilbrook's band, the Fluffers -- is Nu-Squeeze's secret weapon. Playing an organ, synthesizer and piano (sometimes all in the same song), the lanky Large spun like a dervish, kickstarted the drum machine for "Take Me, I'm Yours" and sang along exuberantly in the far left corner of the stage. (Think about the times you held a hairbrush up to your mouth and sang along to songs by yourself, at home in front of a mirror. That was his stage demeanor.) He even karate-chopped the instruments during "Tickle."

6. It occurred to me that Glenn Tilbrook's voice is uncannily similar to that of Crowded House's Neil Finn.

7. Squeeze's incorporation of blues and pure soul isn't mentioned as much, but these influences emerged quite a bit live. The tongue-twisting stomp "Hourglass" was a good example of a modernization of these genres.

8. "Black Coffee in Bed" was my least favorite tune of the night. Needlessly extended -- and sort of meandering -- the tune felt like that song every band has that it's sick of playing. (The audience participation on the backup vocals was entertaining, though.) Classic "Tempted," however, which was sped up, seemed refreshed.

9. Aimee Mann's hour-long opening set was the perfect length. She played a balance of songs from her new album, @#%&*! Smilers, along with familiar "hits" from the Magnolia soundtrack ("Save Me"), a song she dedicated to Paul Thomas Anderson ("Red Vines") and the '90s-era tune "That's Just What You Are" (for which Tilbrook jumped onstage and reprised his guitars/backing vocals appearance). She also reads her message boards (apparently), because she played what she said fans named their "least-favorite song" from Smilers. (Tend to agree; it was a bit slow and unfocused.) Her fantastic backing band helped her lushly arranged songs swell to life, and prevented her trademark laissez-faire, flat vocals from becoming a drag. 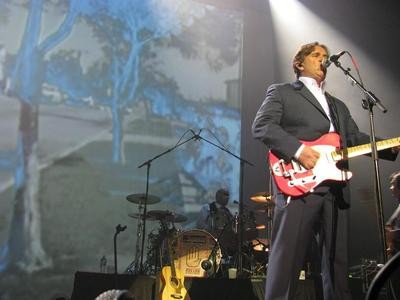 10. The crowd was super into the show, which made me smile. Lots of dancing, singing along and general good cheer. Even though it was my birthday, I was pretty much the youngest person there.