(Please give a warm A to Z welcome to Last Days of Man on Earth proprietor Joe Stumble, who graciously penned this blog post about the Columbus, Ohio, music scene to wrap up our Cleveland Rocks! week(ish). Visit his blog for tons of great posts about and MP3s of forgotten bands -- that you should really know about.)

I went to school in Ohio. I up and moved there on my own when I was 23, and I lived out the remainder of my twenties in Columbus. I love Columbus and hated moving away. To this day I have a soft spot in my heart for that town. With that said, being from Columbus is very different from being from Cleveland. Cleveland is rust-belt. Columbus is corn-belt. Prisonshake is definitely a Cleveland band.

But what do you know about Columbus?

See, I’m not here to knock Cleveland off its pedestal or anything. I just wanna share some Ohio love from downstate. I’ll be honest: It took longer for shit to happen in Columbus. Sure, Mike Rep and The Quotas were blazing a sonic trail up-n-down High Street in the '70s and The Great Plains released some amazing stuff in the '80s, but if a tree falls in the woods and nobody sees it…well, you know how that goes.

So it really wasn’t until the late '80s/early '90s that Columbus got its shit together. But man, when that town got it together, it unleashed some righteous noise on the world. I know because I was there in '92 when The New Bomb Turks launched Destroy-Oh-Boy on us all.

It was like all the promise that Columbus had carried around within itself all those long years just came true. Here was a record we could get behind. See, the sonic mayhem of our northern peers from Clevo was left intact, but the aesthetic was more corn-belt. Look at the title of the album, for cryin’ out loud. If Destroy-Oh-Boy isn’t the perfect verbal combination of punk aggro and Midwestern humor, I don’t know what the hell is. 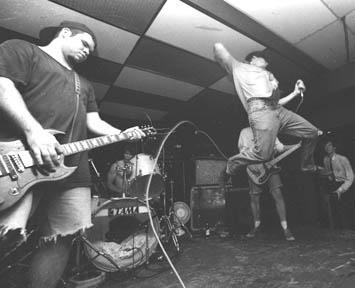 And the tunes! It was faster, more fidgety and balls-out rockin’ than anything going on at the time. Suddenly being from a cowtown became cool. I mean, listen to "Sucker Punch" fer chrissakes and tell me that the Turks did not carry more adrenalin with them than a nitrous-packed mopar.

But that wasn’t it, dear readers! Lo and behold in that most blessed year of 1992, Gaunt released their "Jim Motherfucker" 7-inch and they were off and running. (Ed. note: A two-disc set of free music is downloadable HERE.) Then Thomas Jefferson Slave Apartments released "You Can’t Kill Stupid" and boy o’ boy, you realize that you got yourself a little scene of sorts.

The aesthetic was to hit ‘em as fast as you can -- and as many times as you can -- while keeping them standing. 'Cuz if you can’t take it, you’re not worth it. It was pure Midwestern mayhem of the highest order. I gotta tell ya, I was damn glad to be there. As for you, well you can relive the moment vicariously by listening to the fine albums these bands left behind in their wake. You owe it to yourself. Really.