Dolly Parton charmed a sundry crowd when she stopped by the Fox Theater as part of her "Backwoods Barbie" tour last night: Salt-of-the earth older couples mingled with the occasional tattooed rockabilly woman and flashy, western-geared men -- including, to our delight, one whose cornflower blue silk vest strained against tan bare shoulders and, near the front, a portly older gentleman wearing a creamy suit studded with silver rhinestones. It wasn’t difficult to imagine these folks making a long trek from any number of small Missouri towns for the chance to bask in her familiar legend, and it occurred to me a little haphazardly that Dolly’s specific appeal in St. Louis may be the respite she offers otherwise staunchly Midwestern practicalities. 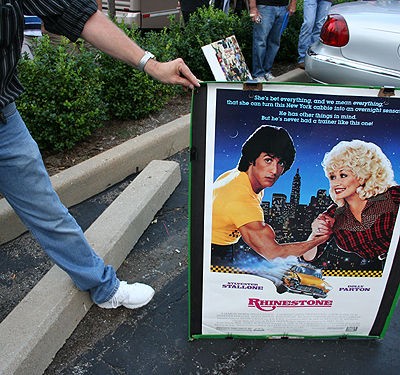 An eleven-member band started the set, and when Dolly appeared like a glittering marionette in a flourish of purple and silver sequins for “Two Doors Down,” the crowd stood for a rollicking start. Never having seen her live, I was struck by the surreal familiarity of her movements -- the snappy chin jerks, head tilts, and manic bounces she uses to traverse the stage. Interviewers frequently express surprise about her height, something she later mentioned as preface to “I’m Little but I’m Loud” (she’s only 5’ 2", but looms so large on television and stage that her petite height can be startling in person). Even then, I was still surprised by her itty-bitty legs; they jutted out from her skirt like spindles.

Also fantastic was the ease with which she transitioned from such seemingly different instruments -- all of which were white and covered in rhinestones. For “Thank God I’m a Country Girl,” she flew through fiddle, banjo, and harmonica, all feverishly supplied by her “useful and ornamental” hick Chippendale (Steve Summers) who dosey-doed in shirtless abandon in overalls nearby.

My first half favorite might have been her Fine Young Cannibals cover “Drive Me Crazy," which was inspired by the sounds of rock emanating from husband Carl Dean’s favorite station on the radio. “I never like to leave a rhinestone unturned,” she sinuously demurred, referring to the rock genre she’d ladled in with the rest of her Backwoods Barbie album's unlikely (and ideal) combination of country and pop.

And I still teared up for the bipolar mood switch Dolly flipped with “Coat of Many Colors,” which she introduced by describing the wealth of love she found in her family amidst the poverty of her childhood, a fast-track trajectory to our own small-town childhoods that she dedicated “to her mother in heaven.” The gospel medley culminating the first half of her show before intermission was also a treat, the stuff of scattered eight tracks in my grandparents' garage.

I was keyed up for Dolly’s second half of the show, the one reviewers have unanimously been yammering about, and our expectations were met with the cracking resonance of a fast high five. Dolly’s costume-switch to a black and silver ensemble vaguely reminiscent of a sparkling tuxedo was perfect for the poppier second half and “Better Get to Livin,” which Dolly wrote for Transamerica [ed. note: No, for Barbie; "Travelin' Thru" is the movie song] -- clips of which appeared behind her on stage -- was upbeat. “Do I Ever Cross Your Mind,” pretty accurately represented here, featured her full band, including one of her brothers and a first cousin, singing a crisp a cappella. This was followed by another a cappella track, a slow-tempo version of “Little Sparrow,” that essentially purged and damned us; the crowd quietly hung by the silver thread of her voice and the cold, lonely glow of those lyrics.

Then came the Dolly that our generation went way back with, including a track that my cousins and I eagerly stuffed into tape decks on road trips anywhere (everywhere) together, “Islands in the Stream.” When Dolly promises that “this could be the year for the real thing,” it still seems somehow possible, and that’s Dolly magic for when you’re slowly losing sight of it.

This was followed, of course, by the zinger “9 to 5,” the same title of a Broadway musical that Dolly has in the works for next yearat the Marriott Marquis theater. Keeping in tradition, she finished with “I Will Always Love You,” a song she wrote for Porter Wagoner, which would bring him to tears decades later at the Grand Ole Opry. The man standing next to me assured me her encore would be “Jesus and Gravity,” and it was, concluding a long evening of gloriously met expectations.