Last night at The Pageant, Alice Cooper gave St. Louis all of the stage theatrics on which he built his career. 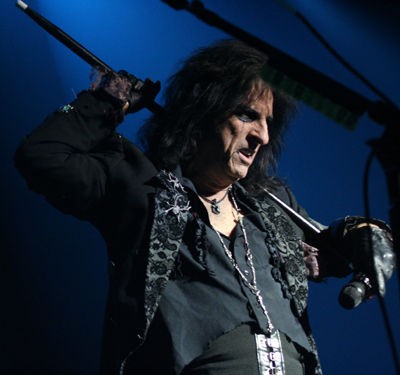 Dancers, zombies, dead Disney princesses, a straight jacket, a mock execution and dead babies abounded. Even the equipment techs were dressed as some kind of Spinal Tap druids. He's been doing this kind of show since the 1970s, and it seems to just get better and more impressive with each passing year.

Cooper took the stage with the full makeup and costume audiences would hope for. Everything, but everything, was black. Most of his props were either leather or wrapped in electrical tape. This display of gothic finery was offset by the one white thing on the stage: Cooper's face. It was painted with the familiar black lines, and from the right angle he looked just like he did 30 years ago. His stage attitude was enthusiastic and he seemed very serious about the show.

Though Cooper's at retirement age, he isn't cutting any corners. He would drop to his knees and run across the stage with the abandon of a man one third of his age. And just when the music would get powerful or the mood would get a little intense, Cooper would sing even harder, looking tortured. When the song was done he'd slump over and then give the audience a little wink, letting them know he was just playin'.

Cooper's interaction with the audience didn't stop during the whole show. He'd smile at the front row and bow a little, signaling his appreciation for their excitement. He also seemed to give the audience all of his stuff. Generous Alice threw out two bedazzled wands and a glittering blinged-out chain, and that was just during the first couple of songs. He also gifts the audience with the things closest to his heart: his children. Yep, the kids are even in on the show. His eldest daughter, Calico Cooper, performed a jarringly beautiful modern ballet during a ballad, and other members of the Cooper family pitch in as assorted back up dancers and stage zombies.

The fun family vibe continues across the stage. Instead of just hiring an average back-up band, Cooper has obviously hired the best dudes he could get his hands on. First of all, the drummer was Eric Singer (you know, from a little band called KISS?) and his drum solo during one of Alice's intermissions was worth the ticket price, at least.

Every band member really stood out in his own way, and that's a lot to say for this kind of show. It takes professionals like guitarist Jason Hook and bassist Chuck Garric be noticed among lights, choreography, an assortment of props and the mighty Cooper, himself.

The band was very interactive with the crowd, frequently throwing out guitar picks, pointing out particularly rockin' audience bros, nodding at the ladies and posing in "rock stance" for pictures. They all looked like they were having a great time, and truly, enough cannot be said about how much they added to the show with both their playing prowess and their engaging presence.