On Sunday afternoon, the members of Wilco were the honorary guest conductors at Wrigley Field during the seventh inning stretch of the Cubs game. Cardinals fans, get ready to have a heart attack: They were all wearing Cubs jerseys. (Video evidence below.)

But in an ensuing interview, Tweedy makes amends for his sartorial choice, by admitting he grew up in Belleville as a Cardinals fan -- and then sheepishly says, "although I don't think they'll have me anymore...this airs in St. Louis, right?" Well, A to Z certainly found it. Still, we have pictorial evidence of Wilco's Lou love, from this May's hometown stand. 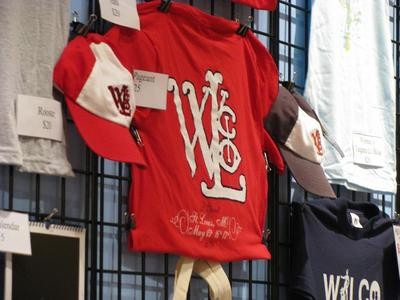 Incidentally, Wilco played a new song on Saturday that Tweedy stressed was a "work in progress," although it sounded done to me. Tentatively named "One Wing," it reminded me a lot of quieter Sonic Youth, in fact (shades of A Ghost is Born, perhaps?), with '80s rock like the Church (no, really) thrown in for good measure, before ending in a giant Nels Cline freakout. It was really excellent. Video after the jump.