(photos and words by Annie Zaleski; click for larger versions) 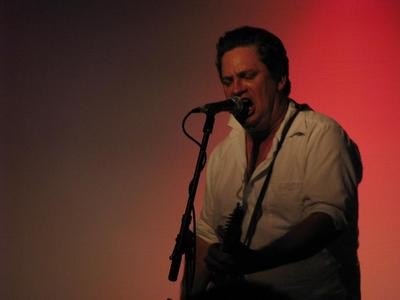 The winds picked up significantly the second I left Dexter Romweber's show Monday night. Lighting flashed in the distance, the temperature had dropped -- in other words, a storm was brewing. Consider it an appropriate aftermath for the scorching set he and sister Sara performed an hour or so earlier.

The Dex Romweber duo specializes in music plucked with the soul and faith of a Sunday morning revival, a fluid mix of blues, surf-rock, rockabilly, proto-rock & roll and garage. Watching Sara pound away on the left-hand side of the stage and Dex slash away on the guitar (while singing in a deep baritone that conjured Elvis and other '50s classic crooners), it became obvious from where the template for the White Stripes came. Nevertheless, Sara is light years beyond Meg White in terms of talent, in terms of versatility (she can handle the diverse styles and genres with aplomb) and rhythmic complexity.

Highlights of the set included a song called "Love Letters" and a song Dex said was culled from the noir film Blue Velvet. After the show, Sara promised they'd come back -- and I hope they do, on a bill filled with other classic St. Louis bluesmen, or with other close musical kin that will help them draw a larger crowd. (Sara Romweber)

A showing of Two-Headed Cow -- a chronicle of his life with Flat Duo Jets and as a solo artist -- preceded the performance. (I was running late -- quelle shock -- so I don't feel qualified to comment.) The viewing was followed by a brief Q&A. Romweber seemed uncomfortable being in front of the small crowd and clearly just wanted to play music, even after clarifying a few things about the movie (he wanted the part about money disputes within the Flat Duo Jets removed, but was out-voted).