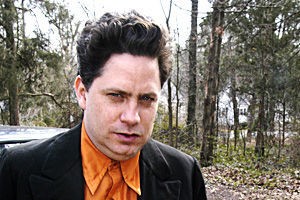 In this week's paper, Shae Moseley chatted with Dexter Romweber, who will be performing tonight at Off Broadway as the Dex Romweber Duo. (His drummer? Sister Sara, who was in Let's Active and Snatches of Pink.) Along with the music, the night will include a showing of the movie Two Headed Cow, which is about his former band Flat Duo Jets, and an audience Q&A. The show starts at 9 p.m. and costs $10.

While you're reading, please enjoy two Flat Duo Jets MP3s taken from the soundtrack to Athens, GA -- Inside/Out, a 1987 documentary about the college town and its musical denizens (including the B-52's, the Squalls, Pylon and the Band That Shall Not Be Named).

After the jump, check out what Dex had to say about some upcoming recording plans; he recently signed to Bloodshot Records. The rest of the Q&A is here.

Shae Moseley: You're getting ready to enter the studio later this summer. What can we expect from the new album?

Dexter Romweber: It's a few covers and a few originals. I know with Exene [Cervenka] we're doing a song called "Lonesome Train" by Stan Kenton, the big band artist. We're trying to get Neko [Case] on a song called "Still Around" which is a little-known Tammy Wynette song, and then hopefully with Cat Power we're going to do a song called "Love Letters," which is sort of an old, jazzy ballad by a woman named Ketty Lester.

Do you have an idea of what the record is going to sound like? How do you think it will be different from your previous work? I'm hoping to add many instruments to the songs, so it definitely won't be completely stripped down. Some of the songs are kind of retro and some of the songs kind of aren't, but this one might have a bit more of a jazzy flavor. It's hard for me to describe it at this point, but I can certainly tell you that it's not going to be a typical retro, rockabilly record.