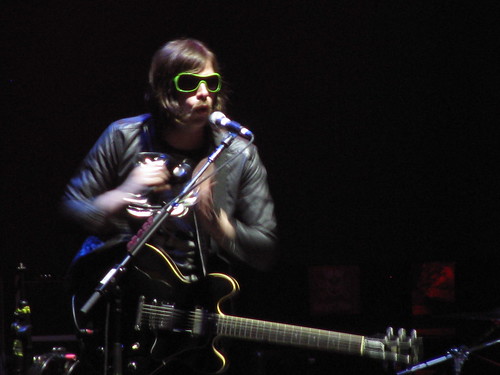 The Foo Fighters’ two-hours-plus show last night proved several things. One, no man is happier to be playing music than Dave Grohl. The bearded, long-haired guitarist/vocalist screamed like a banshee, headbanged, bashed out chords and generally attacked his music like a man possessed by the ghosts of classic rock, metal and punk. He scurried around the stage, sweaty mass of hair flying in his face, axe in hand – and yes, in the encore he actually did say “Axe, please!” to his guitar tech – and through the crowd, on a vertical catwalk which stretched back to the soundboard. His gregarious stage banter and long-winded stories – seriously, near the start of the gig he said, “Once I start talking, the show gets longer and longer…” – mixed together sarcasm, sly humor and plenty of self-deprecation.

Two, the Foo Fighters’ onslaught of gigantic tunes and singles – seriously, its greatest-hits CD, whenever it arrives, will be one of the more solid releases from a post-1990 rock band – proves that it’s become the band Nirvana might have become: a consistent, solid act churning out uncompromising songs that dominate rock radio. Sure, the Foos are nowhere near as revolutionary as Nirvana was, but times are different; a band cranking out heartfelt tunes indebted to Led Zeppelin, Cheap Trick, Van Halen, Ramones, Husker Du, etc. without dumbing-down its music or pandering to the lowest-common-denominator – is still a rarity.

Newer songs (the harmony-laden slow-burn “Long Road to Ruin,” pop-leaning “Cheer Up, Boys (Your Make-Up is Running),” monster car-crash “The Pretender”) connected, mixing seamlessly with old favorites “Learn to Fly” and a scorching “Breakout.” The core quartet – Grohl, guitarist Chris Shiflett, bassist Nate Mendel and drummer Taylor Hawkins – along with four other players (more on that later) helped expand the already-expansive tunes. Not all of these tunes worked -- an extended drum solo on “Stacked Actors” meandered for too long, as did an improvised-sounding, bluesy jam on the Who’s “Young Man Blues,” but the Foos’ alt-rock dominance emerged.

Smartly, the band tempered its rock attack with a mid-song acoustic set. Highlights included a heartfelt version of “Marigold,” a Grohl-penned Nirvana b-side, and a rather epic version of “My Hero,” which had the entire crowd singing along. Hilarious band intros also occurred here. Grohl introduced guitarist Pat Smear (remember him from the “Big Me” video?) as such: “If Judas Priest called and said they wanted you to play, would you?” Smear – a member of influential punk band the Germs – naturally gestured to the effect of “no fucking way.” This pleased Grohl. “You’d rather play with us? I love you, man! Dumbass, they make the big bucks!” Then he performed a frantic guitar-violin duel with Jessy Greene – Foo Fighters do Riverdance? – and she clearly won.

Then he boasted that his band has a triangle player – and namechecked Rage Against the Machine, Green Day and Oasis as those who don’t have trianglists. (Sidenote: St. Louis, why the rousing boos for Oasis?) He then commanded said percussionist, Drew Hester (“the best triangle player over the age of seven years old”), to come to the front of the stage for a solo. And solo he did, with the gusto and fervor of an elementary school kid with ADD.

Last, he introduced drummer Taylor Hawkins, asking him, “Taylor, how many guitar solos are you going to play tonight?”

The surfer-blonde answered: “I don’t know, the night is but a fetus.”

The interlude ended in typical grandiose fashion: Grohl, alone with an electric, did most of “Everlong” by himself, while the rest of the band trekked back to the main big stage – lying in wait to end the song in a loud, noisy crash.

A careening version of “Monkey Wrench” and a positively arena-shaking “All My Life” followed; the latter especially was a highlight, a tune which built and built until Grohl, wide-eyed, screamed the final verses and choruses and the entire place pumped its collective fists in the air.

Before the encore, a fisheye-camera projected onto the stage screens – think The Blair Witch Project -- caught a shot of the setlist (sans encore choices) and Grohl chugging a Corona. He held up fingers, whose purpose was to ask the crowd how many encore songs they wanted to hear. The camera panned to Taylor Hawkins, who held up one finger and mimicked being sleepy. He then held up three fingers, to the delight of the crowd. The camera went back to Grohl, who continued to make funny faces and mug for the camera. (This came back later when the band came back onstage, and Grohl said, “How many songs did Taylor say [for the encore]? Three? He’s the drummer,” in mock disgust.)

He told a long and involved story about Nirvana playing its infamous Mississippi Nights gig in 1991. However, Grohl never actually named the band – assuming, rightly, that everyone in attendance knows his history. The tale went something like this: In a nutshell, he had borrowed gig-opener Urge Overkill’s drumkit (as he had destroyed his in a fit of something the night before, since UO had been poking at it during its sets). Security was treating the crowd badly at Mississippi Nights, and Grohl said “the singer-guy” – meaning Kurt Cobain, which cracked me up – threatened to stop the show unless they stopped. That didn’t end up happening; instead, Cobain invited the audience onstage – and as Grohl put it, the show turned into a “radical fucking kickass riot.” Running backstage to tell UO drummer Blackie Onassis about it, the only response was: “What about my fucking drumset?” And then Grohl had to run around gathering bits of the kit from the rabid crowd.

The rest of the encore was almost climactic, with a rather subdued version of “Big Me” – a vocal duet with Greene – leading right into an uber-‘90s rock “Generator” and an appropriately soaring, uplifting “Best of You,” which ended the night shortly after 11 p.m. 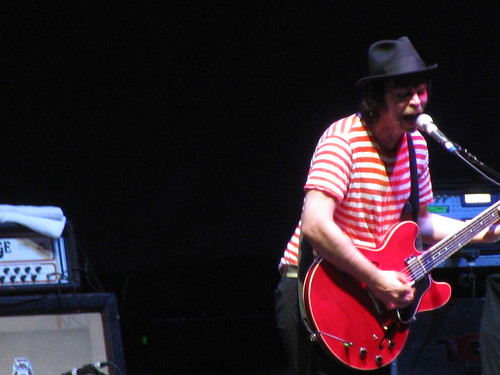 Supergrass – the veteran U.K. act – was a fantastic choice to open the show. Its new album, Diamond Hoo Ha, is a wham-bam-glam stomp, and its whomping attitude and swagger suited the sizable venue. The crowd received the band warmly, as it played new songs “Diamond Hoo Ha Man,” “Rebel In You” and set-closer “Bad Blood.” Oldies “Richard III” and “Caught by the Fuzz” – the first song Supergrass wrote together, said vocalist/guitarist Gaz Coombes – were the hands-down highlights, though. (Coombes, it must be noted, looked like a cross between Jack White and Jeff Tweedy in his hat/red-and-white-striped shirt get-up – and in fact, there were hints of the Raconteurs/White Stripes laced within its sound.) 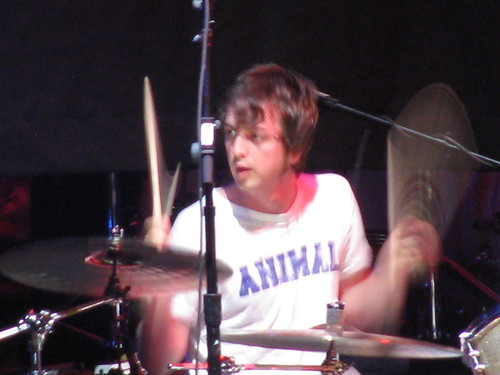