Prior to yesterday, the only other time I'd ever seen M Ward was when he was touring in support of the fantastic 2003 album The Transfiguration of Vincent and opening for Bright Eyes. It was just him and an acoustic guitar then and I was blown away by his stripped down cover of Bowie's ''Let's Dance.'' 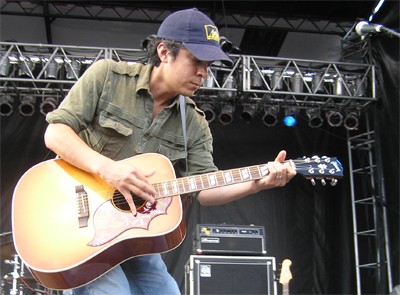 His Sunday set at Pitchfork Music Festival in Chicago was a huge departure from that experience but equally, if not more, engaging. The only solo song was the opener, then he ditched the acoustic guitar and was joined for ''Chinese Translation'' and the rest of the songs by a four piece backing band.