The number of people literally crammed into a corner of Union Park to see Ghostface Killah and Raekwon Sunday afternoon would make a fire marshal shudder. Figuratively, the Wu Tang members were spitting fire. 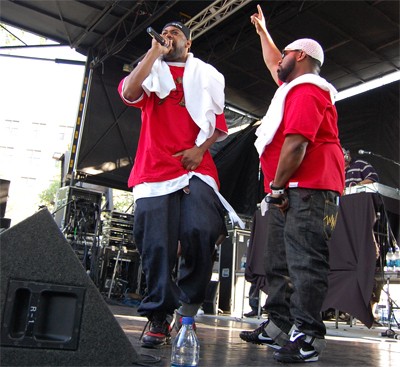 The Wu Tang members rhymed through their catalog of East Coast hip hop classics, opening up with "Criminology" and a remix of "Can It All Be So Simple." And the audience? This was no politely observant indie crowd, this was an amped-up swarm of partiers. Drunk, sun-drenched, shirtless and dirty, this crowd had it going on. Populated with closet hip hop heads, they shouted in unison the Raekown lyric, "Dedicated to babies who came feet first!"

The Ghostface + Raekwon mix on stage was a powerful one, and had Ghost not told the audience that he and Rae had just spent nine hours on a plane coming from Europe, they wouldn't be the wiser. They were bringing heat up there. 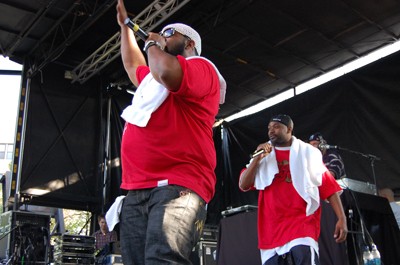 Ghost for one was clearly impressed by the size of the crowd, as the rapper's smile was beaming when he greeted the mass of people before him. Double-fisting mics with a white towel around his neck, the rapper appeared to feed of the crowd, stepping across the stage with Raekwon, who was just as engaging. The worst hip-hop show is one where the rappers clearly would be somewhere else, the best ones (even if they are at outdoor fests) are what went down at 6:05 p.m. Sunday in Chicago.

After "Can It All Be So Simple," they rolled straight into Ghostface's song, "Be Easy."

''Tell ya crew to be easy, niggas walkin 'round with the fake frown sell it on ebay," the duo preached, with the audience right in time with them.

Next up was "Wu-Tang Clan Ain't Nothing Ta Fuck Wit'." By this time, dozens of hands in the audience were raised and moving back and forth like waves.

Near the end, Ghostface told the crowd "Alright, we're gonna test y'all on this shit." They proceeded to rap "I smoke the mic like smokin' Joe Frazier" and the audience promptly responded with "The hell raiser, raisin' hell with the flavor." That continued for the the first three verses of the Wu-Tang classic "Protect Ya Neck." Satisfied, Ghost told the DJ to spin that shit and the duo dropped a filthy rendition of the song. Ghost rapped the entire Inspector Deck verse, but they skipped some of ODB and Method Man verses.

Though Ghost and Rae could have easily filled out the space in front of Pitchfork's two larger stages, it's probably for the best that schedules of other bands prevented it. Up front, packed in with partiers, that tiny stage in the corner of Union Park felt like the best summer barbecue one could attend.