When I saw !!! (pronounced "chk chk chk") a year or so ago in Seattle, it was in a tiny, dark club with no barrier between the stage and the crowd. The audience was dancing like mad from the front to the back. I was in the front. Nic Offer's crotch was directly in my face and I thought he was going to give me a black eye with his Elvis-style pelvic thrusts.

A few things changed from that show to their performance at 6 p.m. today at Pitchfork Music Festival in Chicago. One that certainly didn't was Offer's gyrating lower half, with which again managed to give me an eyeful as he towered above the photographers directly in front of the stage. Also like the last time was the crowd, which was doing all kinds of getting down. I believe !!! was second only to Public Enemy for the number of white people busting out awkward dance moves.

The biggest and most obvious difference from the club show is, of course, the outdoor venue. !!! thrives on a good light show and a dark sweaty club. While Offer and Shannon Funchess commanded the stage well, Offer with his ridiculous short shorts and even more ridiculous arm-swinging, hip-slinging dance moves and Funchess with her raw, intense energy. As a whole group I don't know that I've seen another band that has more fun on stage than !!! does.

Though the band went through a major line-up change since I last saw them, with vocalist/drummer John Pugh quitting the band in late 2007, it seemed to have little impact. In fact, I missed Offer's crazy fro, which he's traded in for a close-cropped coif, more than anything else. 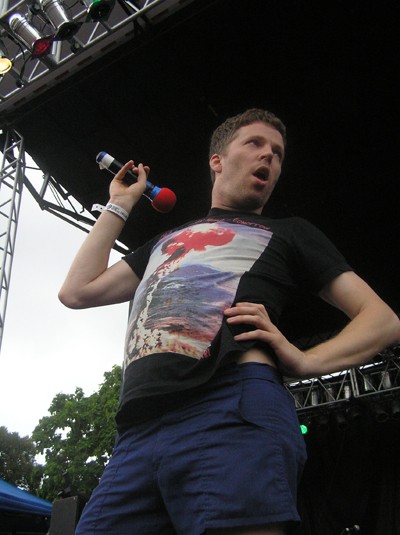 Most of the material they performed came from 2007's Myth Takes LP, including "Must Be the Moon" and a rollicking rendition of "Heart of Hearts" to close the set. While they didn't play some of their hold hits, including "Me and Giuliani Down by the Schoolyard" or "Take Ecstasy With Me," they debuted at least one new song. They didn't give a title but it was kind of a departure from their previous sound. Offer dedicated it to "You and your summer" and it was definitely that kind of jam. There was lots of cowbell, a jazzy sax solo, and an African tribal rhythm that no doubt made Vampire Weekend, who played before them, proud.