Ahhh...Pitchfork Music Festival 2008: Hipsters, humidity and more hipsters. We are here. We are live. We are sweaty.

Mission of Burma is rocking out as I type this. Unless a well of enthusiasm sprung up in the last five minutes, their dance-inspiring punk jams are being met with little more than approving head nods from the audience. Mission's performance of its classic 1982 album, Vs. sounds as urgent and emotional as it did when the LP was released. A solid debut for this fest, even if the audience reaction is more observant (curious? awe-struck?) than empowered and excited.

The crowd is filling in more and more but I've been struck by how sparse the attendance is thus far.

Union Park is about a third of the way full. Maybe it's the fact that it's been raining off and on all day and it's about has hot and sticky as a two rats fucking a wool sock. We'll see if the crowd gets larger for Public Enemy's performance in about an hour.

For now, a few pictures, to whet your appetite for what's going down in the Chi over the next three days.

Photos after the jump. 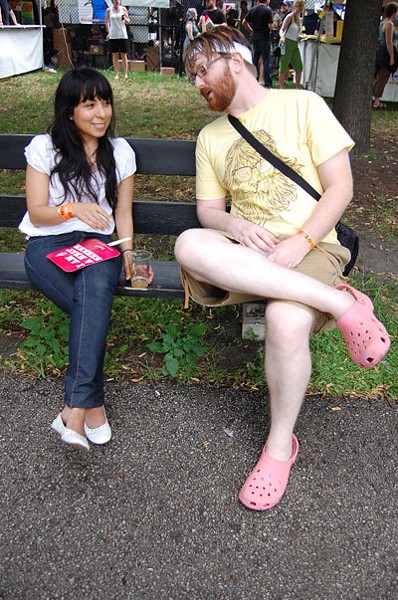 Look back for posts throughout the weekend.