Interview: Mike Peters of the Alarm

The Alarm’s booming, anthemic tunes lead the Wales group to openings slots for U2 and Bob Dylan in the ‘80s. But Mike Peters and co. haven’t ever stopped nodding to the glory of classic hits “68 Guns,” “Rain in the Summertime,” “Strength” and “The Stand” – and in fact, the recently released Guerilla Tactics, a barnstorming album fans of the Undertones and Buzzcocks can appreciate. In fact, the band's punk pedigree is strong: The current incarnation of the Alarm is Peters backed by bassist Craig Adams (Sisters Of Mercy, The Mission, The Cult), drummer Steve Grantley (Stiff Little Fingers) and guitarist James Stevenson (Generation X, Gene Loves Jezebel, The Cult). They'll be opening for the English Beat and the Fixx tonight at the VooDoo Lounge at Harrah's Casino in Maryland Heights. 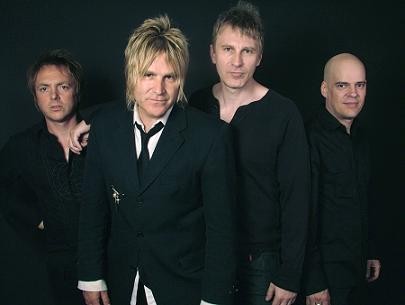 I recently caught up with leader Mike Peters, who wrote Tactics while fighting a battle with chronic lymphocytic leukemia cancer. (Good news: He’s in remission, although it’s a “maintained remission,” and he’s still getting treatment every few months.)

You played in Times Square a few weeks ago, right when Tactics was released. I wsa in New York at the time, I wish I would’ve known! How did that come about, then, how did you dream that up?

It was just more to do with the fact that we have this album out, Guerilla Tactics, and we’ve always employed that approach to get our music across, right from the earliest days of the band when we pretended to be a support band, at a Stray Cats concert to get a gig. We only got caught because we were setting up gear on the stage, but Slim Jim Phantom came to our rescue and kept us on the show and gave us a tour. More in recent times, we employed guerilla tactics to get the new band known. We created a fake band in the U.K. called the Poppyfields, to front our modern-era Alarm single “45 RPM.” We changed our name to the Poppyfields, brought these young guys in the video, and lo an behold, we went into the charts and announced on the BBC that it was the alarm in disguise, and that created a lot of furor and an international news story. Then with the album coming out on Tuesday [July 8], I thought, well, ‘Why don’t we do a gig in Times Square?’ and create a bit of news. Nowadays with the Internet, you can dream up these ideas, and they can flourish. I marched into the center of Times Square with an acoustic guitar and some dedicated Alarm fans, and banged out a set. Knocked the naked cowboy off his perch and had a great little afternoon. [laughs]

I saw it on YouTube. I love the Internet. It’s fantastic, isn’t it? it’s better than TV. It’s great -- with this new album as well, same with the last one, we’ve made a lot of visuals to go with it. We’ve made videos to go with every track. We might not be young enough and hip enough for MTV these days, they really don’t play any music anyway, YouTube is the place to be seen.

I saw a live video of you guys from Manchester a few years ago, though. Kids were moshing and going insane! We’ve managed to retain that element in our audience. The fact that we can still talk about the Alarm in the present tense as a modern band making new music, that does create an excitement that’s palpable between the audience and the band. It’s not like we just got fans who are turning up to hear the new stuff; they’re getting excited about new releases, and so do we as a band, and everyone’s got that extra little edge around them in the gig. They’ve got their new favorite Alarm songs, they’re not just waiting to hear “68 Guns” or “Rain in the Summertime.” When you bring in some new material, it freshens up and makes links with the old songs, and gives them a new lease on life.

Listening to snippets of the new album, yeah, it’s urgent. The Undertones had a record out in the last five years, and it’s the same thing – it’s very urgent. As a band, just because you get older doesn’t mean you have to become irrelevant. We’re still soaking up listening to all the young bands out there, you get challenged by that, and [having] been through a lot in the last few years, that has brought a new energy to the music and revitalized the energy. That’s certainly come out in particular in this record. It felt just right to what I tried to describe in songs, I thought needed to have urgent music behind it, and be a little bit faster than we usually can be. [laughs]

Getting cancer again and recovering again, what was the biggest influence that had on your music? It’s probably just…there’s a certain reality you have to face in that post-diagnosis and then having the treatment. When someone’s talking to you and you have to come to terms with it, there’s a finality to it, or an end in sight, you have to sort of think about, “Wow, what if this was the last journey I’m going to go on?” That brings a certain realism and brings you back down to Earth, really. You have to focus on what is important and the things in life that you hold dear and the things in life that help to define you as a person. And that is the focus and becomes the background for all the songs you write at that particular time.

These songs were informed by everything I hold dear in life, and trying to cling on to life and make the most of it, as well. That comes out in all this music. I started to write some really fast songs to go with that. I suppose there’s almost an anger under there as well, that you maybe don’t bring out in your speech or your actions to people. But if you are faced with the fact that you might be…you have to face the reality that this journey could result in losing your life, there is an anger, everyone has an anger about that. I didn’t want to lose my life and not be able to have the time I want with my children and my wife, and with the band and playing rock & roll. And if you feel like you’re going to lose it, you have to get angry to fight back sometimes. And it might be an anger that’s not shown in aggressive acts, but there is definitely an anger that drives it. and that often results in some high-tempo music and very direct music -- big choruses that you’re singing at the top of your voice cause that is the emotion that is pushing out of your subconscious when you’re writing new songs.

That makes total sense. You’re channeling it, in a way. It’s a bit like, you’re riding this wave that’s bubbling under you. You’re just thinking, hanging on for dear life, there’s a whole wave of emotions coming through you at that time, conflicting emotions, confusing, and then a certain amount of grasping hold of what’s real and then trying to push the certainty that you want to hold onto through all this wave of confusion. I tried to sort of focus on the most direct things I could think of. Rather than running away from it, I dived headlong into it and be as sort of straightforward as I could with the emotions I was dealing with. They were just the songs that came out; I just let them come. I didn’t know I was saying certain lyrics. I was playing my guitar and tunes were coming to me, and they were the words that were coming out as I was singing along to those tunes.

In what time period did you write those songs and record them? They started being written in 2006, I was diagnosed in December 2005. That was the period I started writing the songs. One of the things we did with this album, was create a digital songbook you can buy through the store, thealarm.com. The book tells you how to play every song on the album, in the way we play it in the band. It’s got all the inside knowledge of how to get the unique elements of the playing. One of the pages in the book is a screenshot of my computer where I recorded all the ideas in. You can see the time and the date I started writing all the songs. They started being written in December 2005, right when I was having my first treatments. “Situation Under Control” was written…as a matter of a fact, I had to go straight to the hospital actually. I was in a danger zone…my bloodcount was so high, it was seriously life-threatening. I had to have immediate treatment to get myself under control, and I went into shock having this treatment and was slipping out of reality, and could see the hospital curtains being drawn around the bed, which is always a bad sign in hospital, the nurses going into overdrive and my wife going white with fear. I just was saying, ‘Stay in control, stay in control!’ and had to actually keep the grip on the moment.