We spent the morning at our favorite DeKalb eatery, The Hillside. It may have been Ryan and Stephen’s fourth time eating there, but in their defense, it is pretty great. I realized I don't seek out cheese blintzes nearly enough – so good.

Champaign is only a hop, skip and jump from DeKalb, so we got there in no time, which is great because we all kind of know what we want to do when we get there. We headed straight to our default pre-show hangout, Jupiter’s Pizzeria, where Eric E., Stephen and Ryan launched into a game of pool. Kiley and I decided to take a walk over to Dandelion, our favorite second-hand store in town. I found a few great shirts for cheap, rivaling the great finds I got at Revival in Akron, Ohio – two highly recommended shops.

We headed back to Jupiter, ordered some pies, and jammed the wedge (technically they were squares) while we watched the Birdnals game. Eventually, it was time to head down the street to Mike ‘N Mollys, where we had never played, but had gone to see Jumbling Towers while we were in town for our own show. The venue has an outdoor setup in a fenced-in area, sandwiched comfortably between the bar on one side, and another tall, ivy-covered brick building. 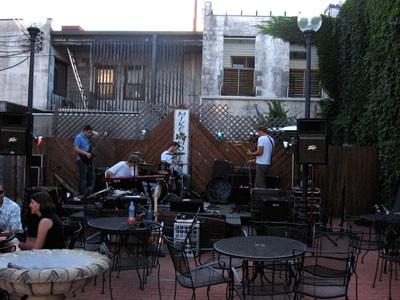 Once we loaded our gear in to the side of the stage, we pulled up a chair and hung out for a bit while Sangamon sound-checked. One might think that the acoustics between two brick walls would be atrocious, but it’s really not bad at all – the ivy probably helps a bit. Directly behind the stage is a wooden privacy fence, and just behind that you can see the back of a two-story apartment building, which has staircases leading up to landings/balconies for the second-floor units. Kiley and I spent a few moments discussing what the funniest thing one of the tenants could walk out of their apartment and do in the middle of a show. We decided the possibilities were endless, and that spontaneity would inevitably provide the best outcome.

Todd Kessler opened the show with a laid-back, reggae-infused singer-songwriter set (whoa hyphens), letting everyone settle in as the sun went down. Next up was Larry Gates, formerly of the Champaign-based band Lorenzo Goetz, who put on an especially entertaining show with his one-man-band project, Curb Service, which brought to mind early Beck and Soul Coughing. Then Sangamon took the stage, serenading their hometown crowd with a true college-rock sound that blended everything from Coldplay to Widespread.

We finally took the stage to play to what has become our home-away-from-hometown crowd, and it was an entirely satisfying end to our tour. There is something about a Champaign audience’s pure and honest enthusiasm that makes us really elevate our set. I think we just have a lot of fun when we play there, and I think it shows. Champaign, you guys are tops. We love you.

After hanging around for a bit to bask in the tour-ending relief, we loaded up and headed over to Ryan and Jody Groff’s, where we have stayed about a dozen times, and is almost literally our home-away-from-home. They just got married a couple months ago, so their place looked super nice with new paint on the walls and new stuff – they’re so cute.

The fatigue set in and we retired for the evening, so ready to roll out of bed and head home. Four days of regular life, and we head out again for a three-show weekend, and then a week later, our CD Release Show for our full-length debut, Alphabet Graveyard, at the Bluebird on July 5th ( that's tonight! with The Hibernauts, Colourmusic, and Jumbling Towers!).