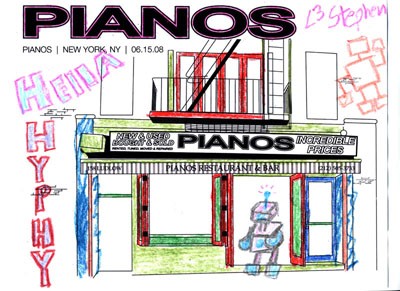 Eric E., Kiley, and I rolled out of bed early to get a ride from Donna to the train station. The three of us were headed into New York early to hang out with some friends and check out the city. After an hour and half train ride, we got dumped out at Penn Station. Kiley and I parted ways with Eric and strolled out into Times Square, which is essentially an advertising theme park. We were meeting Kiley’s friends for lunch, but we had an hour or two to kill, and it’s amazing how Times Square can have SO much going on, and nothing to really do.

After wandering around bored in the midst of a sensory overload, we finally met up with our friend Evan and hopped on the subway.

We ended up eating at a cool little cafe at Bleeker and Broadway, and then popping in and out of some cool shops and boutiques in SoHo. At 5 p.m. we met the rest of the band at the venue, Pianos. After lucking out with a parking spot directly in front of the venue, we loaded in the side door and down the hall to the back room, where the stage is located. The schedule for the night had an amateur comedy group going on at 7 p.m., followed by Scott Alexander at 9, Le Rug at 10 and us at 11.

We had a handful of friends who showed up early to hang out, eat, drink, and be merry.

Before we knew it, 7 p.m. had rolled around, with no sign of the comedy group. Thirty minutes go by, and we’re wondering if we can just go ahead and back-line our drums and amps, but the sound guy says he’s waiting to hear about the comedy group. Fifteen minutes later, the funny arrives. Apparently they do this comedy night all the time, and it’s always at 8 p.m., but no one told them they were starting an hour earlier this time. So, the whole night gets pushed back an hour. Keep in mind, this is a Sunday night, and now we’re going on at midnight, seven hours after we first got to the club.

By the time the first two bands are done, some of our friend’s friends have peaced out due to the lateness, and at Piano’s, bands get paid for who shows up to see them. So basically, we brought people out, but a bunch of them had to leave because the venue moved us back an hour, and now we get paid less. I guess that’s fair.

Our set is still fun, despite the fact that we’re trying not to be tired, and though we’d been pacing our drinks, it had still been seven hours. We got some people dancing, got some good feedback, sold some merch, and we got to hang out with some old friends who we missed, so all-in-all a good night.

You can read Venus Magazine’s review of our set at Piano's.

We loaded out, tracked down a missing band member, and hit the road to New Jersey for our last night at Chris and Donna’s house in Jersey.