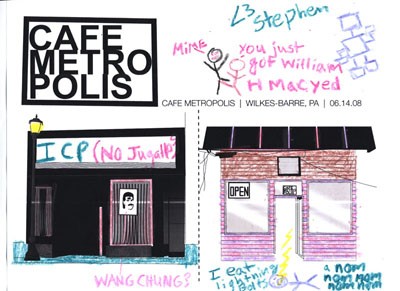 The promises of a bountiful breakfast were fulfilled, as we awoke to French toast, seasoned potatoes, and made-to-order omelettes, which were all delicious. We hung around the house for awhile, catching up on our lives, which we can apparently only access via the internet, and vegging out to a Made marathon on MTV (seriously, how embarrassing is that episode where the girl wants to beatbox?). Eventually we had to pry ourselves away from the domestic comforts and hit the road, headed back to PA for our show at Cafe Metropolis in Wilkes-Barre.

We arrived with plenty of time to load-in and hang out for a bit. The area surrounding the venue apparently used to be pretty dicey, but in the last few years has been totally rehabbed and renovated. One of the guys at the club was telling me about how he used to see people dealing/smoking crack a few doors down from the club while he was taking money at the door.

''On one hand, it was kind of scary, but on the other hand, we could do whatever we wanted.'' Apparently the ''scene'' has changed quite a bit over the years, and what used to be a primarily hardcore/punk/ska venue now puts on a much wider and universally accessible variety of shows.

''Well, once the skinheads started stabbing each other, and the hardcore kids were forming gangs and starting brawls before the first band even finished, you kinda knew it was only a matter of time…''

The bathroom was proof of the venue’s storied past.

Click the above photo for a higher resolution version!

A couple of the venue’s other ornamentations…

We were supposed to play second on the bill, sandwiched between two locals, but the openers were a no-show, so we went ahead and set up onstage. We started our set to a small but enthusiastic group of kids, conversing with them between songs. It was interesting negotiating the stage, since it was deceivingly small and had only one side that sat flush with a wall. At one point, I stepped back from the mic to play trumpet and immediately felt Mike’s hand on my back, warning me that I was about to take a step right off the side of the stage. It wouldn't have been the first time, but with a three-foot stage, it might have been pretty embarrassing and slightly painful.

The second band, The Marquees, were a fun retro-garage band a la The Strokes, Jet, etc. and, by the end of their set, had inspired us to do some pretty sweet dancing -- so sweet that we had the sound guy laughing, so there you go.

While we started loading out, one of the guys in the band pulled Kiley aside to tell her how much he liked our set, and that we sounded like ''the Arcade Fire on crack.'' Well, we do smoke a lot of crack, so…

We finished loading up and hit the road, heading back to the Tomko’s aunt & uncle’s, where we noshed on leftover pizza and mapped out or itinerary for the next morning.