Remember your first crush -- the elementary school Winnie Cooper whopper that never amounted to anything more than furious blushing? You've had other crushes since, but nothing that's breached the Kevin Arnold intensity of that embarrassingly earnest liking.

Click here for a sketch of the show.
It's practically synonymous with nostalgia and was somehow pervasive at Ingrid Michaelson's concert at the Pageant last night.

Earnestness is getting harder to come by these days, especially in popular music, but its presence extended to the full audience of mostly twenty-something women, who were so quietly sincere in their listening that even Ingrid would eventually acknowledge it, claiming to feel like she was on a first date waiting to "make a move beneath [our] angora sweater."

Granted, it was all potentially related to the show's designation as the last stop on her tour, and the mood was set early by the fedora-sporting opener Greg Laswell. The lyricism and sound of Laswell's "Embrace Me" and "What a Day" captured nostalgia's brand of heartfelt yearning. His final song, a cover of Cyndi Lauper's "Girls Just Want to Have Fun," is also available on his MySpace (if you're a sucker for slow acoustic covers, don't miss it). Laswell paraded the melancholy of those familiar lyrics, making us wonder how we'd never heard it lurking there before. 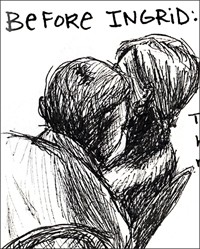 Click here for a sketch of the crowd.
Ingrid eventually appeared in shiny green mary janes and short blue shorts, taking a seat behind a keyboard. Her appearance sweetly embodied the sound of opener, "Breakable," a lyrical tribute to human fragility, which was sung with quiet effortlessness to an audience that, by this time, had become unearthly quiet.

An audience favorite, not surprisingly, was "Overboard," a song featured in Grey's Anatomy that she asked the audience to predict, giving us the hint that it rhymed with "schmorgusboard."

Michaelson also introduced a new song mid-concert, "Blueberry Man," explaining that while on a seven-hour drive into a new city during the tour, the thought crossed her mind (around hour six) that blueberries grew easily, were fine on their own, and kept coming back, like the perfect man. (The sound of the song captured the whimsy of that random thought, including a chirping, harmonious "blueberry man" chorus.)

Michaelson handled the ubiquity of one of her final songs, "The Way I Am," with goofy aplomb, introducing it by rapping to Vanilla Ice's "Ice Ice Baby," and the theme The Fresh Prince of Bel-Air, setting the beat to the inevitable cello strum that presently defines Ingrid Michaelson.