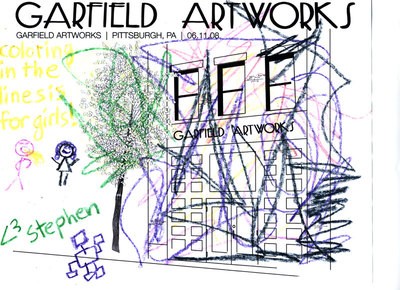 So we found out about this whole tomato thing when we got breakfast/lunch at Einstein’s in Akron and we couldn’t get tomatoes on anything. Reminds me of when I was a kid and thought salmonella had something to do with manila folders. Ammonia and pneumonia were the same thing, too. Oh, to be young again.

Kiley and I bought the first three Indiana Jones movies to prime us for seeing the new one (yeah, I know it’s supposed to suck), and we watched Raiders of the Lost Ark on the way to Pittsburgh. Man, it’s kind of a really bad movie. I mean, there’s plot points that are kind of like, “Wait, what?”, and some really bad acting/dialogue, and some scenes that just plain don’t make sense. We’re hoping that Temple of Doom is a more rewarding watch that fulfills our nostalgic expectations, but maybe some movies were just better when you were a kid. I’ve still been meaning to watch Flight of the Navigator again, but I’m kinda afraid I’ll hate it.

We got to Pittsburgh with plenty of time to kill, so we walked around an area that I think is actually called “the strip,” but I’m not sure. In any case, Eric H., Kiley and I popped into the Pennsylvania Macaroni Co. to peruse their staggering selection of fresh meats and cheeses for a picnic-esque lunch, which we enjoyed behind the Irish restaurant that everyone else ate at.

We headed down the road to Garfield Artworks, our venue for the evening, but were told by Manny, the manager of the space, that we needed to wait 45 minutes to load in. So, we napped in the van across the street – kind of nice, actually. We loaded straight to the stage at the end of the room, which is slightly reminiscent of Lemp Arts Center in St. Louis, but with more gallery-esque displays of artwork.

We played to a crowd that included the other three acts performing (The Show Is The Rainbow, UUVVWWZ, and Moustache Required), a couple of Stephen’s friends that had driven down from Erie, and a couple regular Garfield patrons, but their enthusiasm exceeded their numbers and we were well-received. Darren (the man that is The Show Is The Rainbow) even stormed the stage with a drum during “The Book of Matches” because, as he explained it, “They needed a fourth drummer on that song.” For his spontaneous participation, his enthusiastic post-set feedback, and his own ebulliently frenetic set later in the evening, we’re awarding him the MVP Of The Day.

The Show Is The Rainbow is Darren, his laptop, and projector images filled to the brim with overt ridiculousness. Darren flails about in the middle of the crowd, singing along with his caffeinated dance-pop tracks, as his bizarre eye-candy imagery pulses along onscreen. I could describe some things in detail, but to do so would rob Darren of the opportunity to feed it to you in person, so I would URGE you not to miss The Show Is The Rainbow when he/it comes through your town.

After the show we piled it all back in the van and hit the road for two hours to Erie, Pennsylvania, where we stayed the night with Stephen’s friends. Stay tuned for more.