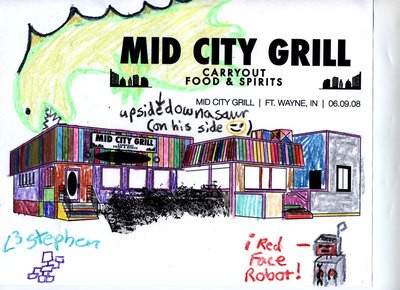 The trip from St. Louis to Fort Wayne was certainly less eventful than Saturday’s flat tire drama. In fact, the only moment worth mentioning was when we were following a semi trailer full of soybeans, and I guess there was an opening somewhere, because soybeans were flying out and bouncing all over – ricocheting off of our van like hail. Soybeans bounce way more than hail, though. It was like a bunch of little tan superballs flying all over the interstate. It was bizarre, if not a little obnoxious, so as we passed the truck, Stephen mooned the driver while Ryan flipped him off between Stephen’s buttcheeks (okay, I maybe made that part up – it really was a boring drive).

We saw some pretty gnarly flooding in Eastern Illinois and a little in Indiana, but Fort Wayne itself seemed to have suffered more storm damage than anything. The house across the street from the venue had a huge tree limb laying in the front yard, which appeared to have smashed into the roof at the front of the house.

We met Prabir as we were loading our gear in. He and his band, The Substitutes, hail from Richmond, Virginia, and they drive an awesome yellow utility van with a yellow light on top. 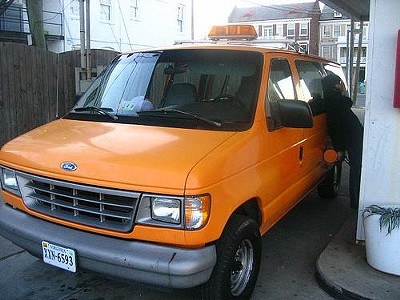 We also got to see our good friend Matt, who most of us went to school with at Webster. He moved from St. Louis over a year ago when he scored a job at Sweetwater, which is based in Fort Wayne.

The show we were playing was part of Mid City Grill’s “New Music Monday,” which is booked by a very cool dude named John. The crowd was a mixture of bar regulars and music enthusiasts, but once we started our set, it seemed like we had everyone’s attention. The applause between songs was spirited, and they seemed to like to keep the clapping going for awhile until one of us spoke. Since there were only two bands, we played a longer set, but the crowd remained attentive and engaged, which was encouraging and appreciated.

Once we started loading off of the stage, it became apparent that our set was well-received, as everyone from John, Prabir and his bandmates, and Matt, to the bar regulars, the bartender, and the bar owner had nothing but compliments for us. One girl stopped Eric H. and I while we were loading gear out: “My face exploded. Thank you.”

Prabir & The Substitutes took the stage and launched into a '60s garage pop frenzy, twirling microphones, shuffling feet and occasionally throwing a knee up on the Rhodes keys, just for good measure. The result kind of reminded me of what would have happened if they had commissioned Ben Kweller to write all the songs for That Thing You Do. They even took it down a notch when they stepped off the stage and walked out into the crowd to sing the five-part a cappella number “Everybody Falls In Love With You.” Honestly, I was really drained after our set, but Prabir & The Substitutes were so full of energy, and just plain fun, that it rubbed off on everyone.

After the show we headed back to Matt’s apartment, since he was so kind to put us up on short notice. For that, and for what he had in store for us the next day, he wins MVP Of The Day.