Our friend Matt and his roommate both work at Sweetwater, and their days start early over there, so we got out of his hair around 7:30 a.m. and headed Ft. Wayne’s much-lauded Sara’s Family Restaurant (G.W. and Hillary have both been patrons). The decor is a charming menagerie of Americana, and the vast majority menu items have a name referencing a president or historical figure. We loaded up on delicious blends of eggs (over-easy and Benedict), pancakes, bacon, hash browns, croissants, English muffins, and fried apples(!).

After stuffing ourselves before 9:00 a.m. (the earliest meal so far), we skipped across town to Sweetwater headquarters, where Matt gave us the grand tour.

Sweetwater is a pro audio and musical instrument retailer that grew out of a Fort Wayne recording studio (they have three or four in their new building) and has continued growing since it opened over a decade ago. Their office/warehouse/everything building in Fort Wayne is a two-year old complex that includes every possible thing a Sweetwater employee (or guest) could ever dream of having in their workplace – to the point where if they added residential units to the back of the building it wouldn’t surprise me in the least if no one ever left the building. I’m not kidding.

When you walk in the front doors of the building you’ll greeted by one or more receptionists at a huge four-countered reception desk.

The Sweetwater logo hangs on a wooden wall above four merged flat-panel screens playing CNN. A lot of the exposed building material in the building is wood and stone, both of which Matt informs us were derived from sources within a 100-mile radius. Most of the wood has also been used in conjunction with bamboo, a more renewable material. Sweetwater is apparently very passionate about taking measures to reduce their carbon footprint as a company – signs are posted around the lobby describing said measures.

To the left of the front desk is the company’s retail store with a room full of keyboards, a main room with miscellaneous pro-audio equipment, v-drums, more keyboards, a room full of electric guitars, a room full of acoustic guitars – you get the idea. Once we’d come to terms with the fact that none of us can afford to buy anything, Matt corralled us together for the grand tour.

In the next hour we get to see the sales department (where Matt works), the “Sweewater University” training classroom, the tech-tricked auditorium, the recording studios, the warehouse (where 90% of orders ship out same-day), the product photo studio, the gourmet coffee station/break room, the deli/cafeteria, the video game arcade and rec room, the racquetball court, the weight room, the hair salon… yeah. Insanity. 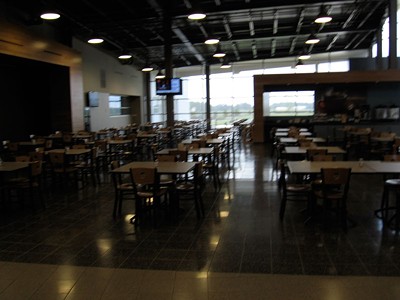 After the tour was over, Matt bid us farewell and headed back to the grind, while we spent some more time in the arcade area trying out the virtual golf/baseball/soccer, etc., racing games, pinball, skeeball, putting green, pool table, and more. Then we left. Like, an hour later. 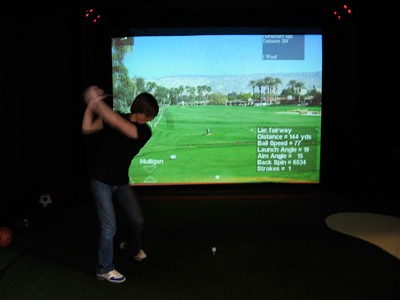 The drive to Akron wasn’t long, so we had some time to kill once we got there. We decided to hole up in a Panera Bread and make use of the free wi-fi for a couple hours. Then we piled back in and drove a few blocks to the house where Mike’s friend Ted from the band House guest was house sitting. So yeah, we were houseguests of the guy from House guest, who was house sitting. Anyway, the owner of the house is on tour, but kind enough to leave behind his totally awesome dog, Cooper, who we’re naming our MVP Of The Day.

After some Mediterranean food at Aladdin’s [ed. note: highly recommended restaurant if you’re in Akron/Cleveland], we walked over to the venue for the night, Matinee. We were the only band on the bill, sandwiched between two sets of DJ Larry’s music trivia.

The stage was possibly the smallest we’ve ever squeezed onto, but somehow we still managed to make it happen. The first round of music trivia got underway, and though we thought we had done fairly well, he called at least four other teams’ names before ours. Oh well. Everyone got a prize anyway.

We started our set to a meager crowd, and after a few songs it started to seem like there might be some regulars that weren’t anticipating a band playing (apparently they don’t normally have live music on Tuesdays). We tried to step it up and go for broke, hoping to win over whoever wanted to stick around and listen, but just as it was starting to seem hopeless, the PA cut out – no vocals, no keys. Welp, we’re done. No, yeah, it’s fine, we’ll be done.

Unfortunately this meant that DJ Larry couldn’t continue with Round 2 of his music trivia, so Ryan and I tried to troubleshoot the problem. After a minute or two of poking around, we realized that everything in the PA rig, including the amp and sub amp, were running through the power conditioner and into the same outlet as a crock pot, coffee maker, and pizza oven. So, with a quick reset of the circuit breaker and the breaker on the power conditioner, everything was up and running again.

We hung around for a little while longer while DJ Larry kept “spinning” his playlist, and then we hit it. Back at the house, we hung out for a bit, talked recording with Ted, and let Cooper do Cooper, as only Cooper can do.