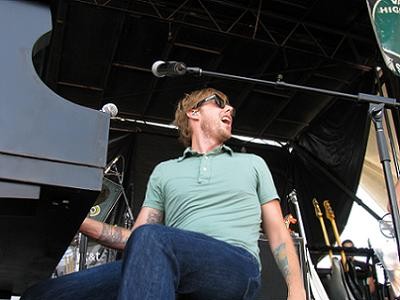 I'm not gonna lie: Unfortunately, I didn't see very many bands this year at Warped Tour. All of the groups I wanted to see went on late -- from 3 p.m. on. But since nobody knows when bands are playing until the day-of, we were there soon after doors opened. Which meant that since we're old, about five hours in the sun was our limit. In fact, around 2 p.m. or so, I started feeling nauseated and headache-y, although we were guzzling water. Not wanting to, you know, get heatstroke, we ended up leaving before seeing many of the marquee bands -- like Story of the Year, Say Anything, Against Me!, Paramore, the Bronx, Katy Perry, etc.

Warped is an endurance test, but a far different one than Lollapalooza (or even SXSW). With so many bands on so many stages (causing bleeding here and there), and so many kids whipped up into a frenzy, it's pure sensory overload. That's perhaps why I didn't see as many bands too; with so many choices, it's hard to figure out where to go (or even where some of the stages are -- a few were tucked away and hard to find), so wandering around with no particular aim seems a better choice.

Here are some brief thoughts on the acts I did see, though:

Cobra Starship: Doors opened at 11 a.m., we showed up at 11:20 or so. Cobra Starship was already on one of the main stages. Argh. Being devoted fans, we peered through a chain-link fence and watched its set. For so early in the morning, the synth-punk party band was in good spirits, playing peppy versions of "Snakes on a Plane" and "Guilty Pleasure."

Evergreen Terrace: Cookie Monster gargling with sand and gravel over rote chugging riffs. I've never really been into its music, and I can't say hearing 'em live convinced me otherwise.

Maylene and the Sons of Disaster: What if Ian Astbury of the Cult went and lived in the South and fronted a hardcore band? That sums up Maylene and co., which actually slayed its all-too-brief set. Hints of good-ol' boy country flair cropped up in between punishing riffs and metal flourishes. Don't think I'd listen to its CD, but live, very entertaining.

Broadway Calls: The generic emo-punk soundtrack to a respite on some picnic tables. Call it screamo Muzak.

The Pink Spiders: Only vocalist Matt Friction remains from the original-ish line-up, but the crack team of hired hands behind him sounded solid, meaning that the group sounded way tighter than I've heard it in years. More the throttling white-hot-coal of Murder City Devils and the Hives than syrupy power-pop, the Spiders especially nailed "Teenage Graffiti."

Jack's Mannequin: For its brief set, the band trotted out all of the hits ("Holiday from Real," "Dark Blue," "I'm Ready") albeit in super-hard-rocking form. Two new songs, the Queen-like "Suicide Blonde" -- where Andrew McMahon scales the top of his vocal range -- and the more delicate "Swim" stirred interest in the upcoming release of September's The Glass Passenger.

The Pinker Tones: So up my alley, three dudes dressed alike -- in silver and black, no less -- bumping electro jams that reference the DFA's urban chic, Daft Punk's fun and Eurodisco's overall danceability. The Barcelona trio also appeared to be having the most fun of any group there.

Between the Trees: I keep wanting to call this band Forever Through the Trees, but that's wrong. The band played on our way out, and its heartfelt piano-pop piqued my interest quite a bit. More classical and Ben Folds-like -- okay, and also like the Fray, who I unironically love -- than other piano groups, I'm intrigued to hear more.