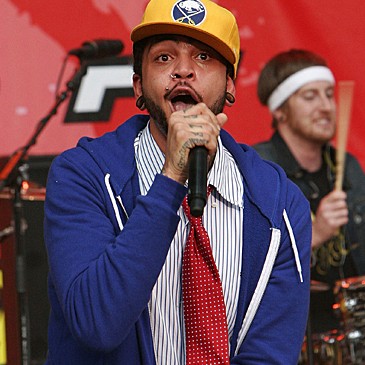 Yesterday's Warped Tour stop at Maryland Heights' Verizon Wireless Amphitheater wasn't all sunburns, music and fun for one of the bands. Gym Class Heroes front man Travis McCoy was arrested after tussling with a fan who had been heckling him during his band's day-closing set.

Sergeant Joe Eagan of the Maryland Heights Police Department says department policy is not to release individual names until a warrant is issued, although he does confirm the band involved was Gym Class Heroes and "that there was an incident at the amphitheater last night between one of the artists and a fan."

Adds Eagan: "We did make an arrest, and bond was posted by one of the members of one of the bands." The sergeant says he was present at the amphitheater and witnessed the incident. He declines to specify the offense but notes that "I would say it was fair to say it was an assault charge."

According to an eyewitness fan report, an audience member called McCoy an "ignorant nigger" during the set.

The journal post, authored by a fan who says she was standing right next to the heckler, describes how McCoy allegedly told the man to come onstage, whereupon the man climbed over a barrier separating the crowd from the stage.

The poster goes on to report that a short time later, McCoy hit the fan with a microphone "so hard that the top of the mic broke off. He then reached down from the stage, grabbed the guy by the fro, and started beating the shit out of him while the crowd was screaming and the security was freaking out and trying to pull them apart."

Says Sergeant Eagan: "The person that was involved in the fight declined anything other than what I would call cursory medical attention. On-site paramedics did take a look at him, and there was some very basic medical attention given."

Eagan says the alleged heckler was arrested on an outstanding warrant. "It did not have anything to do with that incident," the sergeant explains. "It was an unrelated matter. He had some outstanding bench warrants that needed to be taken care of."

At 22 seconds in, McCoy says: "Listen, that's not even characteristic of me. I'm sorry you guys had to see that shit. But if someone calls you something that offensive and that fucking disgusting, you have to bash their head with a microphone, I'm sorry."

"Somebody in the crowd was taunting Travis with racial slurs. Travis invited him onstage with the intent of calling him out in front of the crowd, with absolutely no intention of a physical altercation. When he tried to help him onstage, the guy hit Travis in the knee area (which has been in a brace because of a recent sprain), forcing Travis to defend himself. At this point, a scuffle broke out.

"This whole incident is unfortunate. Travis McCoy and Gym Class Heroes are anything but violent. Their message is about racial unity and having a good time. It's amazing that in 2008 there are still people out there that would say such ignorant things.

"Travis is deeply upset that this happened, and has expressed his apologies to the band's fans that were at the show, [Warped Tour founder] Kevin Lyman, and the Vans Warped Tour. GCH is putting this behind them and looks forward to seeing everyone on the rest of the tour."

If and when charges are filed, we'll keep you updated.