Warped Tour St. Louis: The Popular, the Local and the Weird

Ah, Warped Tour. Every year, the kids save their pennies in order to buy tickets for the all-day celebration of all things mall-emo, pop-punk, screamo, ska, Reel Big Fish (and sometimes, even real punk). This year is no exception, although in many respects, St. Louis lucked out this year in terms of the line-up. (Heck, there's even some things that appeal to -- gasp -- adults!) Below are some of the more popular acts hitting the Verizon Wireless Amphitheater today, as well as some of the more unexpected guests -- and of course, the locals baking in the heat. We'll have a full report later today and tomorrow.

Barcelona, Span pop duo the Pinker Tones would fit better opening for Daft Punk, the Chemical Brothers or Fatboy Slim, but somehow it's landed on Warped Tour all summer, becoming the resident misfit electro-spazzes on the bill. Go listen.

Ex-Christian artist Katy Hudson has reinvented herself as sassy pop starlet Katy Perry (even though her debut reminds me of Julie Brown -- oldsters may remember "Homecoming Queen's Got a Gun"). Despite her hyper-pop pedigree, she's on Warped all summer, alongside boyfriend Travis McCoy of emo-hip-hoppers Gym Class Heroes. Feel free to start a debate about the male-gaze-drawing "I Kissed a Girl" in the comments. 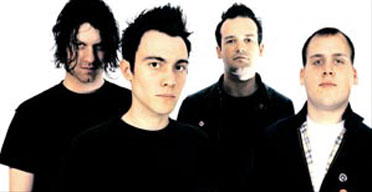 (The Bronx) You have to feel sorry for the Bronx, which has always been closer in spirit to Seattle howlers the Murder City Devils and the Cops -- if not countless vintage LA punk shit-kickers -- but always seems stuck playing with watered-down hardcore bands or shitty kiddie bands. Now apparently liberated from its major-label deal, the band is giving away the song "Knifeman" on its MySpace profile for a limited time -- with another four older songs available on its main Web site.

Glossy pop-rockers Paramore didn't make it to St. Louis on an individual tour, which makes anticipation among its fans even higher for this Warped appearance. Not since the days of Gwen Stefani fronting No Doubt has a leading lady rocked so many hair colors and a chirpy, spunky voice -- which makes me love Hayley Williams even more. Stream its entire album here.

Say Anything is another band who didn't make it our way on a big tour -- which is actually okay, since Max Bemis & Co.'s 2007 2xCD album, In Defense of the Genre, was much too bloated and scattered to really have an impact. (Or else I'm just far too old to get it, which is also possible -- although I do know that Bemis' strident-but-whiny voice is an acquired taste of the highest degree.) Still, the amusing video for "Wow, I Can Get Sexual Too" and the danceable Genre single "Baby Girl, I'm a Blur" are both guilty pleasures.

Jack's Mannequin gets far too much of a rep as a kiddie-piano band -- which is a damn shame, since Andrew McMahon's melodies and lyrics are far more nuanced and deeper than your average artist. Here's a new song "Swim" the band debuted on Sunday night. God bless YouTube. Jack's will also be at the Pageant on Sunday, August 10.

Story of the Year seem rejuvenated from being on Epitaph Records -- which leaves no doubt that these Warped staples will be whirling like dervishes while playing tunes from the new The Black Swan and its previous two albums too.

As I said earlier in the year, Fight! Fight! Fight! "certainly appeals to the under-21 crowd; its tunes mainly address puppy love and longing, and the importance of friendship and dancing." Since its music recalls the "bouncy pogo-pop of Paramore and the tongue-twisting sugar-punk of Fall Out Boy (along with countless other modern rock acts)," its appearance at Warped Tour is a match made in heaven.