Best Track: “I Wanna Be Somebody.” A good ol’ sex, drugs and rock & roll screamer in which W.A.S.P. pushes their B.C. Rich guitars to face-melting extremes. Basically, the lead singer repeats over and over, “I wanna be somebody, be somebody cool.” Just a suggestion, but some new threads might help.

Worst Track: “School Daze” This is a blatant Alice Cooper “School’s Out” rip-off. It started out with a bunch of little kids saying the pledge of allegiance, then went into the same riff they used for every other song. Lyrics include: “Tick tock, I’m counting down the daze/I pledge no allegiance every day/ they’re gonna drive me crazy/ no one here understands me.” Shockingly, for a band called W.A.S.P., this had nothing to do with the Spike Lee film School Daze.

Worst Track #2: “The Torture Never Stops” The last track, and the perfect way of describing this album.

Who you can thank for the amazing cover art: Their amps go up to eleven. Photographs by Moshe Hollywood Brakha. Design by Larry Vigon. 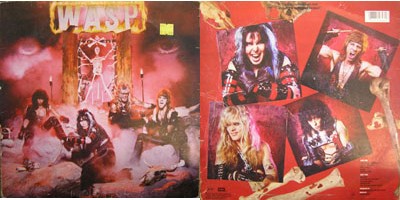 - W.A.S.P. stands for “We Are Sexual Perverts.” This is engraved on the vinyl on this album next to the label.

- The first single from this album was supposed to be called “Animal (Fuck Like a Beast)” but their label decided that was a bad idea and released the album sans controversial track (it was later included on a re-issue). W.A.S.P. was, according to Wiki, “A popular target for Tipper Gore and the Parent’s Music Resource Center.”

- Lead singer Blackie Lawless was set to play the T-1000 in Terminator 2: Judgement Day but lost out on the part to Robert Patrick after both James Cameron and the Governator decided that at 6' 4'' he was too tall for the role.

- W.A.S.P. is still around and touring but lead singer/ bassist Blackie Lawless (real name: Steven Edward Duren) is the only founding member who remains. Showing that he has a sense of humor, Lawless actually has a cameo in This is Spinal Tap.

- The best Wikipedia nugget of all comes from the page for drummer Mike Dupke. Not only has Dupke played drums for John Mellencamp in the past, he dresses up as Peter Criss every year for Halloween.