Cobra Starship: The '80s Cartoon Battle Outtakes from the Interview 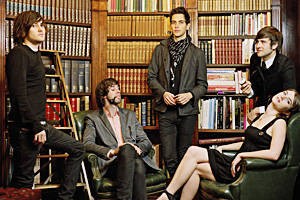 In this week's paper, Anna Genoese caught up with Cobra Starship guitarist (and This Is Ivy League frontman) Ryland Blackinton. After the jump, take a look at a music video from Cobra Starship; in the meantime, peruse an outtake from our interview with Blackinton, in which we discuss the serious subject of 1980s cartoons. Cobra Starship plays tomorrow at Warped Tour; stay tuned late Tuesday and Wednesday for full coverage of photos and other insanity.

Which do you think is better, G. I. Joe or the Transformers? Um… that’s tough. As a kid I was a big fan of both, but I always liked G. I. Joe because of Sergeant Slaughter, so I think I like G. I. Joe better than Transformers. Yeah.

Do you think the Teenage Mutant Ninja Turtles trumps them all? I mean, I definitely like Ninja Turtles more than G. I. Joe and Transformers combined. I don’t know why. Maybe just because the live action movies were… I don’t know, they just struck me a little more because they had karate and stuff. And pizza. And I love karate and pizza.

Who was your favorite Turtle? As I got older, I liked Leonardo, because he’s more practical, you know what I mean? But as a kid, I liked Raphael a lot, because he’s, he’s got a bad temper, and he would use, like, swear words, and I thought that was cool.