Although Rancid's been around since 1991, the band showed on Saturday night that it can still put on a show that compels fans to sing along so loudly, so perfectly in time with the lyrics, that you could have mistaken Pop's for a soccer stadium. 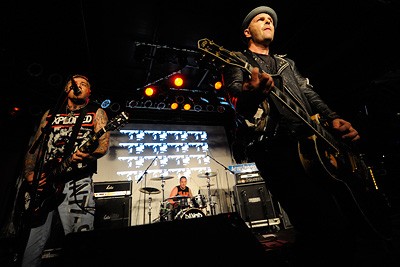 Openers Coliseum, who hail from Louisville, Kentucky, blasted through their set of straight-ahead hardcore. Its newest release, New Salvation, came out last August on Relapse Records. And it's not that Coliseum didn't fit the bill with Rancid -- who has with played underground bands from across the spectrum -- but let's just say that Coliseum will mesh much easier with Converge and Integrity when the trio embarks on a European tour in a few weeks.

Exene Cervenka and the Original Sinners fit better on the bill, largely because Cervenka is the singer for X. The Original Sinners' set was a combination of pscyho-billy blues and alt-country, and X cover songs. Cervenka, at 52, belted out her vocals and leaned back to hit each note. Wearing a black dress with black cowboy boots, she swayed along with the songs that at their best sounded liked lost Blondie tracks, and at their worst reminded this reviewer of seeing sub-par blues bands in bars.

The last time Rancid came to St. Louis was on July 28 and July 29, 2006, when it played two consecutive shows at the now-closed Mississippi Nights, so it's not a surprise that about 1,500 people showed up to this show, which sold out by 8:40 p.m. And a diverse crowd it was: It appeared as if 100 of those people were wearing Rancid T-shirts, and the other 1,400 had on a band T-shirt. Here's a track-by-track breakdown of the set.

"Fall Back Down": The set began, as it has for much of this current tour, with this song from the 2003 LP, Indestructible. Immediately, the metal barricade separating the stage from the audience began to tip, and the four bouncers had their hands full with the tide of crowd surfers. I'll never understand crowd surfing at a punk show (or anywhere, really): It's fucking stupid. Just dive off the stage. Act like it's a punk show, not Lollapalooza. Anyway, ''Fall Back Down'' compelled strangers to put their arm around one another and shout the words into each other's ears. At least this was the case with the very big, tattooed guy next to me, so I obliged the audition.

"Roots Radicals": ''Took the 60 Bus, outta downtown Campbell...'' Wow. It's good to hear a classic song like this early in the set. During the verse sung by Tim Armstrong on this Lars Frederiksen-led track, Armstrong's famously mumbled vocals were actually distinguishable, letting those who had not listened to Rancid in years know just when to join in on the chorus. "Give 'em the boot..."

"Tattoo": A ripper sung by Frederiksen. Short and to-the-point.

"Journey to the End of the East Bay": This song indirectly references Armstrong and bassist Matt Freeman's time in seminal ska-punk band Operation Ivy. Here are three timestamps to wrap your head around: Twenty years ago, Operation Ivy was an active band. A dozen years ago this song was released. Last night, there were kids – a lot of kids – singing along to this track that was older than them.

"Tenderloin": About the impoverished and crime-ridden Tenderloin section of San Francisco. The song's a ripper, led by Matt Freeman on vocals. "Nihilism": The first track off 1994's Let's Go!. A good song, but at this point, I decided to jot down the attire for the punks: Bass player Matt Freeman, dressed in black jeans, a black button-up and oxblood Doc Martens. Tim Armstrong: gray porkpie hat, leather jacket, jeans and Converse Chuck's. Lars Frederiksen, long the most punk-looking member of the bunch: bleached jeans with ''ANTI-SOCIAL'' stenciled on the left leg in black spray paint and an Exploited T-shirt (no sleeves, of course. Of course).

"On the Other Side": Bouncers had their hands full for most of the night, but I decided to watch them during this song. Let me say I know that legal obligations for operating a 1,500-person rock venue require such boneheads to be up front, grabbing people and shoving them away from the stage, but in a perfect world, the people at a punk show wouldn't need a barricade. They could get up, dive off and not become stage potatoes. The harsh reality: Rancid needed those bouncers. Good God, just imagine a mob of sweaty idiots trying to sing along in the microphone, grasping that bit of fame they want so badly.

"Old Friend": Another hit from Wolves, this ska-guitar-heavy song, induced little skanking in the swirling mob of people on the dancefloor. More crowd-surfing!

"Maxwell Murder": The first song off Wolves, this is a straight-up punk classic for Matt Freeman's bass solo alone. The version of “Maxwell Murder” played on Saturday night included a longer, maybe 60-second, bass solo by Freeman, who is normally is outshined by the Armstrong-Frederiksen duo. Freeman taught a lot of kids, I imagine, how to play bass through Rancid LP's.

"Gunshot": Freeman sang the lead vocals on this track, his throaty voice carried verse strongly and the version at Pop's was the song that most resembled its recorded counterpart.

"Knowledge": An Operation Ivy cover that Rancid has worked into their set over the past couple of years. While it was always talked about among hardcore fans in the '90s whether Rancid would ever do an Op Ivy cover (the consensus was that no, Rancid would not), they started playing it to enthusiastic audiences recently. Twenty years later, the most visual difference were the cell phone cameras.

"The Way I Feel", "Lock, Step and Gone": One, here's a video of Rancid doing the latter in a stadium in Japan. Kind of nuts. Video here. Two, a guy with Charles Manson eyes tattooed on his back (to accompany his tiger-stripe face tats, I suppose) wanted to let everyone know about his sick tats by not wearing a shirt. After numerous crowd-surfs, he was pulled down by the bouncers, and stumbled/ran right into a friend and I. Several times. A friend who accompanied me said he had enough of the tweaker and went outside. Okay, I was on my own for the rest of the set.

"Olympia, WA": In February, 1995, Rancid wrote this song while in New York City. It's about Washington state. Observation during the song: Every band has those lines in their songs that resonate especially clearly with individual fans. Some fans can intimately relate to some lyrics more than others. Such was the case with the really big guy next to me, standing next to a person I guess was his wife. He looks right at me and shouts these lines: ''How many times will it take me, before I go crazy, before I lose everything?'' I mean, that's a tough moment, to sing those lines to a stranger with utmost sincerity. But don't look at me when you're doing it bub. Weird. I call this phenomenon ''Creepy Hard-Singing.''

"Adina": A ripping good song, too short to really make any observations, but my favorite. Rancid, of course pulled it off without a hitch. This band is about as professional as punk performers get without treading into New Found Glory territory. I assume they are celebrities in the Bay Area. Like, if Davey Havok from AFI walks into a bar where Lars Frederiksen is having a beer, I don't know, my money is on Frederiksen getting the beer bought for him first. Anyway.

"Salvation": A mother was twirling her son, who could not have been more than five years old, during this song. The boy was wearing an Unseen shirt. Who would have thought that a song about salvaging junk from upscale neighborhoods while being a homeless guy could be personified so cutely?

"Who Would've Thought", "Black Derby": The crowd up front was still going strong at this point in the set, more than halfway through. In the back though, there were yawns visible.

"The War's End": This is only Rancid song with a Billy Bragg reference. One of my personal favorites, from the Wolves LP. This is the point where Pop's felt like a soccer stadium full of singing hooligans:

"Bloodclot", "Quite Alright": During "Quite Alright," Lars wanted to see a ''good old fashioned circle pit.'' That didn't quite happen.

The best of this bunch of stand-alone hits was "I Wanna Riot," released in 1994 and featured on the Punk-O-Rama Volume I release. A dirty ska jam, this song was vintage Rancid. It was released again as part of the B Sides and C Sides CD, full of just those: a rarities CD with compilation and seven-inch EP tracks. See a classic video of Rancid doing this song here.

"Time Bomb": The encore song. It was good, but people were filing out during this song.