Just Right: Most of the place. From the old punk fliers framed on the wall with care to the newest version of Golden Tee, this place feels a lot cleaner than its dingier punk venue ancestors. Not Quite: The sound coming from the p.a. needs polishing. Overheard Quote: "I used to go to the old Creepy Crawl and would never go to the bathroom there. Here, I'd go in and take a shit right now if I had to."

Pictures and a recap of last night's show are after the jump.

Fubar is owned, managed and partially bartended by Bob Fancher, who was behind the bar for more than a decade at the Creepy Crawl. But it's evident upon walking up to Fancher's new bar that this place is clear step up from that venue. Fresh coats of paint, digital jukeboxes, video games, two bars and even some natural light filtering in caught the attention of the hundred or so concert-goers there Monday night.

When patrons enter the door at Fubar, they'll step into a small foyer with entrances to two equally sized, larger rooms. On the right side is the venue, with a stage at the front of the room to the right (similar to downtown club 2 Cents Plain in this regard). When one enters this room, they'll be overtaken by darkness. Literally. You have to feel your way around the front of the room if the band is not playing. Near the back of the room is the bar, where the lighting situation is better, but still like one would expect at any rock club. 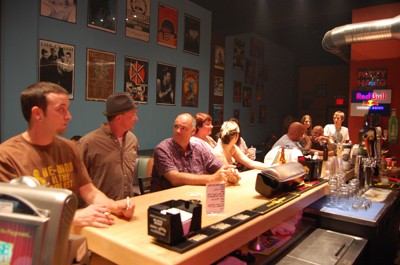 The other room at Fubar is a lounge area, with booths, a smaller bar and punk show fliers and posters on the walls that should reassure newcomers that the venue is legit – bands like the Dead Kennedys and Minor Threat, along with The Clash and Tom Waits. The posters on the wall occupied the attention of all as they came in the lounge, but Fancher said the ones hanging now represent only a fourth of the ones he plans to hang up. 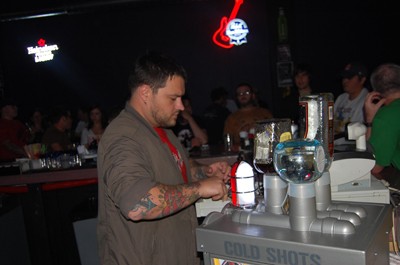 Fancher toiled at the Creepy Crawl – its new location a half-a-mile away – for “ten years, five months,” he said. “I've been dreaming about (opening a venue) since I was 15 or 16 years old.” 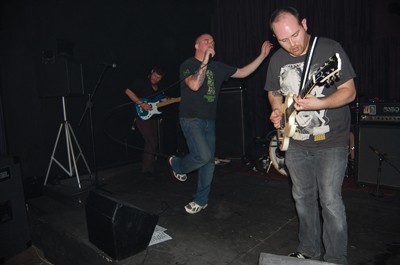 On Monday, Not Waving But Drowning, a bygone metal band from St. Louis' own underground music history, reunited to help ring in Fubar's arrival on the St. Louis scene. 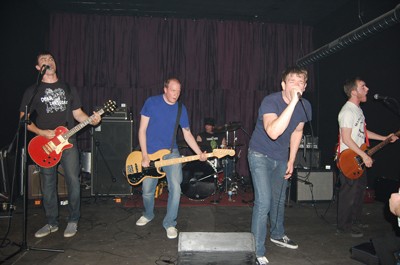 Locals the Humanoids opened up as did The Disappeared and Finner.

A few other notes about the place: The men's room was immaculate. The sinks were a virginal white and the walls exploded with paint. It's a new place, so this new-bathroom-feel could quickly fade. Amenities for the rocker – like toilet-side ashtrays and fold-down bottle holders enable indisposed boozing. A quick head-pop into the women's room shows about the same level of quality.

The tables have old punk and rock LP covers and posters plastered beneath the clear plastic overlay, something this writer thinks every punk probably wanted at one point.

Food is available through The U., the recently opened sandwich shop (that's open late) near the Saint Louis University campus.

For non-smokers, Fubar will be a breath of fresh air. While many were still puffing on Monday night, the smoky fog at other rock clubs in St. Louis just wasn't present at Fubar. High ceilings in both rooms and the ability to step outside for a smoke (if you're older than 21) keep the venue's interior, dare I say, airy?

Bottom Line: As venues go, Fubar hits the mark but has few exceptional qualities, yet. Attention to detail like the punk fliers on the tables and walls, as well as the bathroom beer-holders, show experience gained by going to rock bars for a decade. Even though the venue is in its infancy now, it has already surpassed contemporaries in atmosphere if not the sound quality of live acts.