The show wasn't quite as ambient or as well-paced as the other show I saw (here in St. Louis at the Pageant in 2006) -- and it was hot and humid inside the venue -- and so the experience wasn't quite as transcendent as perhaps I wanted it to be. (Even the presence of Sigur Bros -- translation: frat-dudes who like Sigur Ros -- didn't spoil the show, however.) Whether unfair or not, I like my Sigur shows sad and mournful, conjuring the solemnity of a church service and provoking emotion through langorous, stretched-out classical/orchestral flourishes. In Kansas City, the white-clad brass band distracted from the songs, making them too busy and almost too gimmicky. Just as soon as the band hit a groove -- due to tinkling percussion and wistful soundscapes, more often than not -- something shattered the mood; instrument changes, the addition (or subtraction) of people onstage or simply the performance of a song that slowed down or sped up from the previous one. Perhaps the group is still trying to figure out how to assimilate its brighter, brisker new material with old songs.

A member of Amiina: 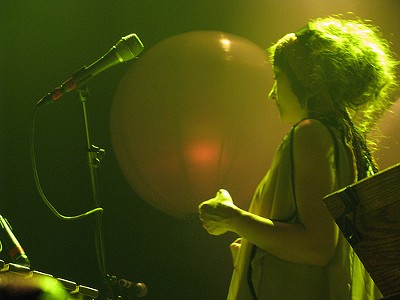 Still, opening number "Svefn-g-Englar" -- as alien and UFO-like live as on disc -- was transcendent, as were the times when Jonsi Birgisson's mournful animal-croon soared above Sigur's chilled hymns.

The opening act -- trombonist Helgi Hrafn Jónsson -- performed a short, pleasant set of folkie tunes that reminded me a lot of Jose Gonzalez. He seemed grateful for the chance to play his own tunes, charming enthusiasm that was infectious.

On the Road Again Snapshots