(Nada Surf plays the Bluebird on Saturday, June 7, with the Republic Tigers.) 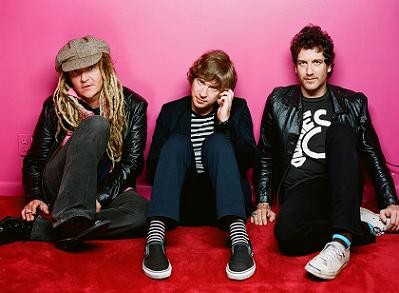 Matthew Caws is an excellent multi-tasker. The 40-year-old Nada Surf frontman sings while playing guitar, plays in a touring band while managing an almost normal life in Brooklyn -- and conducts phone interviews with Midwestern alt-weekly papers while cleaning his apartment. ''I'm doing housework, so I'll be moving around and I might run out of breath,'' he warns. I'm not too concerned; if Nada Surf's decade-long career, bouncing back from one-hit wonder adversity to become one of today's most-loved indie-pop bands hasn't worn Caws out, making a few beds isn't going to put him over the top.

Ryan Wasoba: You guys have kind of run the gamut in St. Louis as far as shows you've played. You're playing the Bluebird this time around, and then last time it was a college show. Then the time before that, you played at Harrah's Casino. Matthew Caws:Haha, yeah. That was a little bit unusual.

So you've had a weird history here, but you've kind of just had a weird career in general. I think it seems weirder from the outside. For us, the shows have changed along the way -- and once in a while we have to sit down and have a conversation about, ''Okay, what are we doing? Is this wise?'' Besides from that, it just is what it is. Things have gotten a lot better in the last few years, which is great. I guess that our career seems weird, but it just seems so normal because it's my life.

You guys have been around so long, you've definitely just seen a lot of changes in how things go in music in over ten years of playing. Yeah, it's almost like we've been different kinds of bands.

It's almost like you've had more than one career. Yeah, exactly.

So what's different about touring in 2008 versus touring in 1998? Well, the crowds are really varied right now, which is nice. We're getting a lot more young people than I usually expect. That's always weird. I'm like, ''What is this? Younger brothers and sisters? Why is everybody fifteen? That's amazing!''

They're probably the same age as the people that were going to the shows when you were a younger band, they just seem so much younger now. Probably. I think we've been seeing it more on the last three records now.

Well, the last three records are the only ones that were presented the same way, all being released by Barsuk. Do you think that has anything to do with it? I do think so. I mean, we had this break between the second one and the third one after we got dropped, and that was kind of great! It was like taking a year off after high school or something. It was good because then there were a few years of not a lot of touring, and I just got to sit around and think about music. It was just a giant vacation.

When your career started and ''Popular'' was a hit, was it weird to just get thrown into this situation and then just have to deal with it? Oh yeah, it was overwhelming, and I'm glad we got over it.

A while ago I talked to Sean Nelson from Harvey Danger, who was in a similar situation. In reference to ''Flagpole Sitta," he said that ''it didn't matter what he felt or thought when he wrote that song because the song doesn't belong to him anymore, it belongs to pop culture now.'' Do you feel the same way about ''Popular?'' Not exactly. I mean, it belongs to me but it's definitely a free loan to the library. It's neat when something feels like a part of pop culture and it's exciting. Like, ''Popular'' was on a KTEL compilation, which was a big deal to me. I had a KTEL compilation when I was growing up and that was so exciting somehow.

Was it weird having that song represent Nada Surf? Well, it's jokier than we are most of the time. We had the same producer as Weezer and the same glasses. I still wear them to drive, but back then I had to wear them so I could read the lyrics to ''Popular'' off of a sheet of paper. (laughs) So for some very random reasons, we got lumped into the Weezer/Weezer-like category which was unfortunate because I love them, but what the fuck?! But we really like the song and we still play it. I think it bought us some time in a weird way. And I'm sure every two weeks or so, one person that listened to ''Popular'' back then gets curious and listens to us now. It's kind of the same way an acre of Louisiana wetlands disappears every day or every month or whatever. Something like that. We just have to play and act like it's just another one of our songs, and we're pretending a little bit, but whatever, you don't think about it.

That's good. I was a little hesitant to ask about it. Nah, it's not a sore spot. I mean, I think it was thrust upon us, this idea that having one hit and then not having another thing for a while is horrible, but it's not. We were still playing to people that wanted to see us and liked other songs too, and we were in a safety bubble for a bit.

Let's talk about Lucky. Were there any specific goals in mind, things you wanted to accomplish with the record? No, just make another record we were excited about. You know, it's hard to even talk about the thing that makes one feel like a record is ready or not, and a lot of it has to do with whether it sustains a certain mood for its whole thing. Even if ideally, on another level the moods are supposed to vary a lot, I feel like a record's only really done when you get this overall feeling from it. So every time we make a record it's always feeling like, even though you're not at all reinventing the wheel, it feels like you're trying to the whole time. But it's always song to song and not album to album, which is why I can never answer specific questions about records. I always write when I've recently been through something or upset about something and usually delineate some kind of anxiety, but then the act of playing and singing is so therapeutic that the songs all become positive in the end. So I think they have a similar vector, down and up and down and up. It's the opposite of a death metal band, I guess (laughs). And don't get me wrong, I love goth, but it's different for us. So I guess we weren't going for anything different except for that we always are.

Is it harder to make records after making a bunch of other ones? Is there more to consider in the context of the other records? Honestly, as I get older, for better or worse, my thinking becomes more complicated because I have more happening in my life. So even though it's more rewarding to write as it goes along, it really varies between being extremely difficult and extremely easy depending on what else is happening. I guess that's the way it's always been for me though. But it's exciting. It's like a waiting game. I have to turn down invitations to things when I'm writing, because I just kind of stay in the house.

Do you find that you have to schedule time for yourself to write to kind of force yourself to do it? Yes, fully knowing that I may not accomplish anything. But I still have to clear the space out.

Years from now, what do you want people to remember Nada Surf for? I don't know, I just like being in somebody's record collection. What I'd really like to think is that if I was my age now or 50 years from now and had a record collection and was never in a band but had the taste I have now that I would have Nada Surf records in my library. So I kind of do it for myself in a way.

Do you think that you would like your band if you weren't in it? I think I would. I hope I would. Yeah, I definitely would. I mean, of course because I've always wanted to do exactly what I want to hear. It's like how everybody's their own radio station. You choose what you play and listen to. And when I'm around the house I have my own radio on, which means I'm putting different records on the stereo. And once in a while, because of that, I get a little itchy and sit down and play guitar myself and get into my own thing for an hour or two and then listen to somebody else's music again. And it's not like I'm trying to do everything I ever like, because there's some things that are out of our range. I mean, we're not Motorhead.

I think that makes sense with your band, it seems like that's what Nada Surf is, is just good songs. And you have your stylistic things that you prefer to do but it's not like ''Oh, THAT sounds like Nada Surf.'' Totally. In fact, it sometimes surprises me when someone says that we have a sound at all. If we do, I'm not really conscious of what it is.