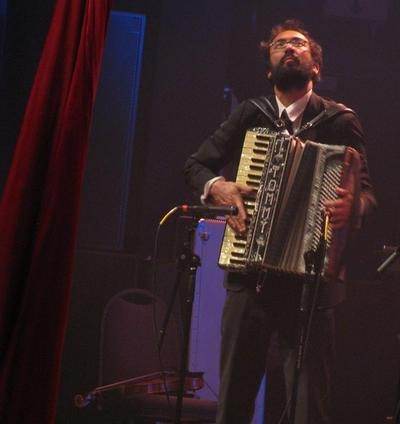 (Hagerman) I'm way too tired and out of words to describe DeVotchKa's Friday night show at the Pageant with Basia Bulat and Bad Folk -- at least in any extensive way. But all three bands were extremely impressive. Stop by this here blog tomorrow for a cool bonus from the show.

Locals Bad Folk again mystified me -- and by that, I mean: Why isn't this band hugely popular in the entire country? Banjo, accordion and pedal steel, plus Tim Rakel's dry, fervent vocal delivery and distinctive, unique songs and insane energy; think Damien Jurado and Okkervil River. They're playing at Mangia on Saturday, May 24 -- go, and you won't be disappointed.

Basia Bulat seemed stoked to be playing her music; the blonde, cowboy boot-sporting Canadian exuded bubbliness as she played tunes from Oh, My Darling. (Her MySpace headline is "More Fun Than Your Very Own Pony!"; fitting.) A Daniel Johnston cover, her atmospheric harp, a gentle string section and plenty of harmonies -- like prairie-fed art-folk -- had people dancing up a storm. Aside: Her voice often reminded me of Shakira's vocal yodels -- in a good way.

Equally happy were the members of DeVotchKa; I kept snapping photos of them all grinning clandestinely onstage. The band's set matched this joyous feeling; I was almost wholly unfamiliar with its catalog going into the show, and the group blew me away with its otherwordly mix of gypsy folk-punk, Mariachi madness, orchestral indie-rock and general exuberance. Incorporating Bulat's string section made the band's tunes swell and blossom; I often felt like I was at the symphony or in the movie Amelie.

Urata -- looking like a cross between Jake Gyllenhaal and Morrissey -- channeled Jeff Buckley and a crooning Spanish troubadour. The group covered Siouxsie and the Banshees' "The Last Beat of my Heart" -- remember this tomorrow -- and employed a burlesque/acrobat dancer to contort herself from a billowing red curtain suspended from the ceiling for the encore. Tunes from the new A Mad and Faithful Telling were as bewitching and often-spooky live as on disc; "Transliterator" especially stood out for its beauty. 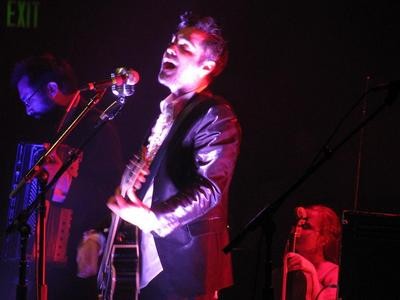