Show Review: Wilco at the Pageant, Saturday, May 17

(Review and photos by Annie Zaleski)

How could Wilco top the past two nights of its residency in St. Louis? For starters, Jeff Tweedy could strut onstage wearing a white Nudie suit with glittering red flower appliqués all over it – and launch into “Misunderstood” as song number one. (If you’re keeping score at home, the band screamed “Nothing!” 32 or 33 times.) 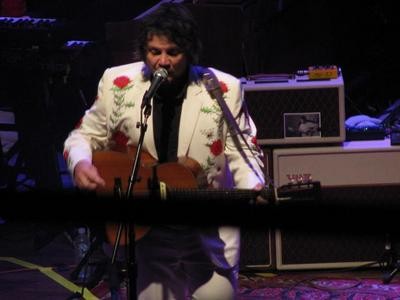 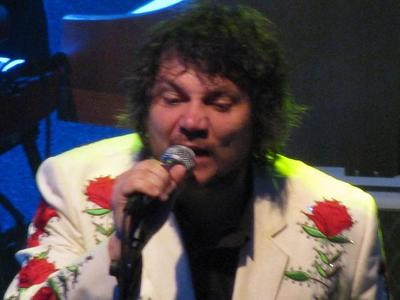 The main set’s atmosphere aligned with Tweedy’s Rhinestone Cowboy attire, possessing more of a twangy, rustic feel than Thursday’s show. This meant that plenty of songs from A.M. saw the light of day, including the rollicking “Box Full of Letters,” “Pick up the Change” and a barnburning “Too Far Apart.” Several songs from Wilco’s Mermaid Avenue collaborations with Billy Bragg (“Blood of the Lamb,” “Airline to Heaven”) also made appearances, as did the Summerteeth slow-boiler, harmonica-laden “She’s a Jar” and jangle-pop gem “ELT.”

Perhaps unsurprisingly, the crowd (which was already rather amped for the show, judging by the crackling pre-concert buzzing) talked during these slower, quieter songs. A lot. In fact, its chatter nearly drowned out “She’s a Jar” and some of the softer songs, including most from Sky Blue Sky. Seriously, people; I’ve said this before, but if you want to talk to your friends, save your cash and go to a bar.

It’s too bad people decided to be rude, because seeing the songs on Sky live made me appreciate them so much more. 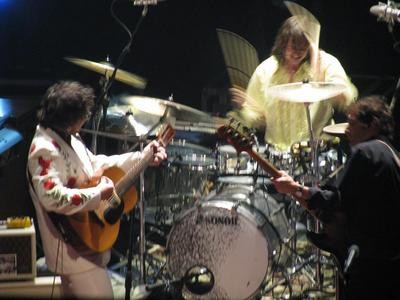 What came across as sleepy-eyed in the studio had an electric undercurrent of nuance and energy live. “Impossible Germany” in particular emerged as the album’s best song – mainly due to the Pat Sansone/Tweedy guitar duel -- while “Side with the Seeds” possessed a fabulous soul/Motown flair and “Hate It Here” channeled Marvin Gaye in an abstract way.

Still, Wilco shined when it just rocked the fuck out. “Handshake Drugs” in particular ended in fantastic squalls of feedback, while “I’m the Man who Loves You” saw Glenn Kotche standing on his drumkit, sticks in the air, to start the song. Tweedy also was in fine commenting form. Before “Airline to Heaven,” he said, “I don’t get out much more, but is this making sense?” He then observed, “There’s a woman right here flipping me off, but she appears to be having a good time. Is it opposite day? This triangle in the crowd” – he gestures toward the front – “produces crazy women.” Later, he claimed that the band doesn’t play much on Saturday nights, but then drawled, “Saturday night’s all right…for loving!”

The whopping twelve-song encore(s) kept this loose, fun spirit intact. Tonight’s version of “Kingpin” in particular was rather epic. Alan Sparhawk from the Retribution Gospel Choir came out to play guitar; he and Tweedy had a conversation about the current tour, where they reminisced about “run-ins with the law and bison burgers.” As Tweedy talked, the band started to improve a bluesy-funk jam (Tweedy: “It’s funky, what’s going on?”) and then threw things at each other.

Presumably, everyone went to the baseball game this afternoon; a stuffed Cardinal was tossed around, causing Tweedy to note randomly, “Oh, it’s dead. We’ll fix that.” Even funnier, keyboardist Mikael Jorgensen sported a red, #1 fan Styrofoam finger – prompting Tweedy’s quote of the night, “This is the most pandering we've ever done!"

This energy carried over to the second encore, which started with the stripped-back, moving “Bob Dylan’s 49th Beard.” “Heavy Metal Drummer” came next, followed by the silly, Spongebob Squarepants soundtrack rarity “Just a Kid,” which was dedicated to Jeff’s dad and dad-to-be Glenn Kotche, From there, the band’s energy just kept building and building to nuclear levels – from the Stonesy “Casino Queen,” a rip-roaring “Hoodoo Voodoo” and finally straight into “Outtasite (Outtamind).”

The house lights and music came up, to the disappointment of the crowd, but the band came back anyway for a third encore: a punky, off-the-rails version of “I’m a Wheel.”

Someone on the Via Chicago message boards beat me to the sentiment of the next few paragraphs, but I was going to note it myself, based on the following. Near the end of the main set, Tweedy said, “Speaking for the band, we’re very appreciative of the hospitality and warmth of the city. Personally, I’m touched by the feelings in this room in the last three nights.” The song they played next? A.M.’s “Too Far Apart,” whose recurring line is: “Too far apart / Right from the start / And I couldn't be any closer to you now.”

I don’t know what the song refers to, whether it’s romance, friendship (or heck, Tweedy’s relationship with St. Louis). And I haven’t seen any of Wilco’s other St. Louis shows in recent years; before Thursday, I last saw Wilco opening for R.E.M. in 1999. But it’s no secret that the Lou is weird about its native sons who leave; it’s almost a betrayal for people to depart for other places, as if having ambition and seizing other opportunities elsewhere somehow is a personal affront to the entire city of St. Louis.

But based on the insane energy, excitement and genuine goodwill I experienced, I hope that these three shows completely erased whatever bitterness, enmity, rifts or slights – real or imagined – existed between the city and Tweedy. He looked and sounded genuinely taken aback, if not humbled, by the positive response the crowds gave Wilco. In the future, I hope the band ends all of its tours in St. Louis -- we’ll be waiting with open arms, as Jeff Tweedy will always have a home here.

Setlist: “Misunderstood” “Blood of the Lamb” “You Are my Face” “Hummingbird” “A Shot in the Arm” “ELT” “Pot Kettle Black” “Handshake Drugs” “Side with the Seeds” “She’s a Jar” “Box Full of Letters” “Airline to Heaven” “Jesus, Etc.” “Impossible Germany” “Pick Up the Change” “Too Far Apart” “Theologians” “I’m the Man Who Loves You”