Saturday night at a capacity Duck Room, the Bottle Rockets started where most bands finish. They tore through “24 Hours a Day,” the hardest, most direct rocker in their catalog, like they’d spent the night warming up on Stooges and AC/DC covers, like they wanted to sum up a show that hadn’t even happened yet in a collision of ferocious guitars and militantly precise drumming.

But the band really was just getting started. After an opening set from Otis Gibbs (Indiana’s answer to Billy Bragg), vocalist Brian Henneman stood in front of a simple back line of three Fender amps, one Ampeg bass rig and zero acoustic guitars. He declared that the band considered setting up in the corner by the bar and standing on tables to give the impression of the low basement ceilings found in the old Cicero’s. (Another thing you didn’t know about the Bottle Rockets: The band’s first gig was to be at Cicero’s in December 1992; the show was snowed out.) (Brian Henneman) 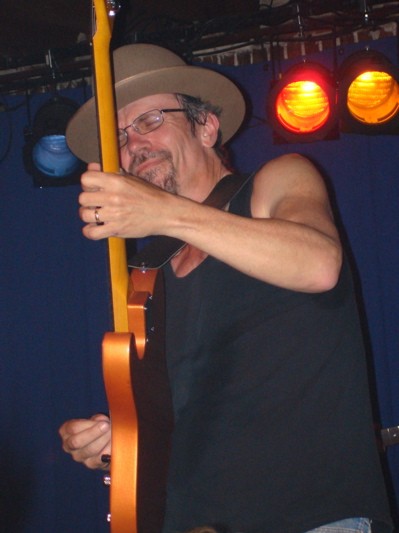 Then the band hunched over and leapt into the title track from their best album; they stayed in that slightly menacing, fully determined crouch through a set of rockers hand-picked by some Internet fan named Pig Farmer Jr. The “design our set list” contest has become a ubiquitous gimmick, which mostly serves to undermine the whole point of a good set list: to let a band tell a story from start to finish. They wouldn’t let Pig Farmer Jr. sequence their next album. Why let him orchestrate the plot for their fifteenth-anniversary gig in their hometown?

That was the curmudgeon in me talking. And then I had a moment of clarity as “24 Hours” rammed into the under-appreciated, recent rocker “Middle Man,” into a laser-hot “Gravity Fails,” into an embittered “Smoking 100s Alone,” into a hell bent “Waiting on a Train”: Pig Farmer Jr. is some kind of genius.

The Bottle Rockets catalog--with a fifteen-year range of literate, vicious, tender, stupid, brilliant, political, and joyous songs -- is simply unfuckable with. But that segue from “Smoking 100s” to “Waiting on a Train,” two different views from two different times on the same withering relationship, proved just how powerful an astute sequence can be. So too the move from “Floataway” (a Doug Sahm song, and one of only two covers all night) into “Perfect Far Away” drew a direct line from roots soul to garage rock instinct. By the time they launched into back-to-back sing-a-longs, “Welfare Music” and “Indianapolis,” the packed-in crowd -- dominated by strange scenes of dude-on-dude touching, dudes lifting cell phones in the air and dudes incapable of either dancing or applauding -- locked into the spirit of the show, and gave back to a band that has given them so many nights of undiluted, unpretentious rock and roll.

“I saw the Rolling Stones movie at the iMax,” Henneman said with ironic awe. “Mick Jagger is in better shape than me [though at 143 lbs, Henneman surely weighs less] and Keith Richards is 70 years old, but he’s still rocking. And if he can do it, we can do it. Of course, it’s easier do it if you have a katrillion dollars in the bank, but that doesn’t matter!” On nights like this, it surely didn’t seem to, and the guitar duels between Henneman on custom Telecaster-esque guitar (to be raffled off at the end of the fifteenth-anniversary tour) and John Horton on his signature Gibson Explorer rang and chimed together like they weren’t duels at all, but conversational celebrations of tone and counter-melodies.

When Eric “Roscoe” Ambel, who produced The Brooklyn Side and will be directing their next album (which Henneman said won’t be out til 2009), walked out of the green room to join the band with a guitar the size of Michigan, Henneman couldn’t resist asking to hear the opening riff of “I Love Rock and Roll,” which Ambel played during his days with Joan Jett. They only tossed off a few bars of that before throwing themselves into “1000 Dollar Car,” “Align Yourself” and the stupid-genius punk of “Gotta Get Up.”

Ambel stuck around for the encore--including the chestnuts “Financing His Romance” and “White Boy Blues,” and the new song “Get On the Bus” (a catchy rocker that bodes well for the next album)— but it was the pre-encore, Pig Farmer Jr.-picked and never-before-attempted cover “Down By the River” that was the evening’s sweetest thrill. The band has played plenty of Neil Young covers in their time, but none this soulful, with Ambel and bassist Keith Voegele hitting each “la la la” and surging with the chorus, as Ortmann’s drumming kept the band moving forward and up and inexorably through the odyssey.

If one performance of one song could tell the story of a fifteen-year career, and perhaps point to the next fifteen, then that was the one.