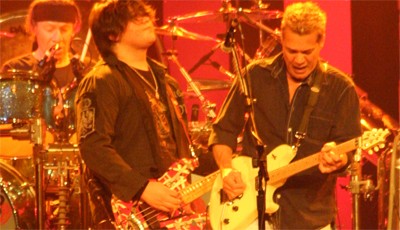 During the opening song of Van Halen’s two-hour set – its version of the Kinks’ “You Really Got Me” -- David Lee Roth bellowed, “Better late than never!!!” This wasn’t typical Roth-ian hyperbole though: After two show cancellations in the past six months (one due to a scheduling conflict, another due to medical reasons), many disgruntled fans weren’t sure if Van Halen would make it to St. Louis for Saturday night’s gig – or even if the show would be worth it when the quartet did arrive.

The Scottrade Center concert exceeded all expectations, however, and proved that not all mostly-reunion tours by legendary bands have to feel creaky and cash-grabby. Credit first a stellar setlist, which seemed geared toward the fans, especially because it contained a generous amount of album cuts and favorites from VH’s 1978-1985 golden age. In other words, 1978’s Van Halen (“Runnin’ with the Devil,” “Ain’t Talkin’ ‘Bout Love,” “Little Dreamer,” “Jamie’s Cryin’”), Van Halen II (“Dance the Night Away,” “Somebody Get Me a Doctor”), Fair Warning (“So This Is Love?”) and of course 1984 (“Panama,” “Hot for Teacher,” “Jump”) were all well represented.

The enduring musical talent of the brothers Van Halen also inspired awe. Guitarist Eddie – looking like a typical California rocker, with red sneakers, hole-in-knee jeans and blond, spiky hair – impressed the most. Despite a trip to rehab and health problems (including a bout with cancer and a hip replacement – the latter of which didn’t stop him from leaping off the drum riser a few times anyway), he proved exactly why he’s one of the greatest guitar players of all time. At times it appeared like he had three hands, the meedlee-meedlee riffs and siren noises he unleashed were so lightning-fast; at other times, he conjured mournful blues melodies, channeled Hendrix’s elaborate solos and even coaxed out virtuoso-caliber symphonies. Heck, Eddie even played part of a song using a power drill– spurring Roth to say, “With all of this technology, Van Halen finally discovers the electric fucking carpentry drill.”

"Eruption" from the show, thanks to a random guy on YouTube:

Roth’s quips naturally tended toward the wry: To describe Van Halen’s newest member, bassist Wolfgang Van Halen, he crowed: “Three-fourths original, one-fourth inevitable!” And in fact, Wolfgang (Eddie’s son, who controversially replaced original bassist Michael Anthony in 2006) held his own, even if the shaggy-haired, baggy-clothes-wearing 17-year-old looked as though he should instead be playing in his high school’s talent show with his garage-metal band. When he harmonized with his dad, it (unsurprisingly) sounded great; and when the spotlight found him standing high atop lit-up cube onstage, ready to signal the start of “Runnin’ With the Devil,” the confidence was palpable.

And then there was David Lee Roth. The very definition of charismatic, Diamond Dave still has the metabolism and hyperactive energy of a 15-year-old boy, judging by his toned physique and constant movement. (If you’re keeping score at home, he unbuttoned his shirt by song four.) His grinning and manic moves – along with the three different-colored top hats he donned at various times, to go along with several jackets with glittery appliqués -- made him resemble Frank Gorshin’s Riddler from the original Batman series.

During “Beautiful Girls” he put a striped scarf on his head like a babushka; the mic stand became a baton for him to twirl during “Dance the Night Away,” and it was a fencing epee during other songs. One song segued into the Who’s “Magic Bus” -- and don’t think I’m tripping, but I swear I also heard him drop a verse from rap group Clipse’s “Wamp Wamp” at one point. And even if his high leg kicks weren’t quite as high -- and he was a bit hoarse at the end, although overall his voice sounded much better than expected -- the ass-shaking, preening, camera-mugging and crowd flirting resembled that of a politician schmoozing for votes.

To preface the first encore song “Ice Cream Man," Roth told a rambling, extended story about having relatives in the St. Louis area, smoking weed – pleasing the folks around me sparking up, no doubt – Van Halen’s early days, the suburbs and other random topics while strumming an acoustic guitar, VH1 Storytellers-style. The extended break was a good breather, because by that time the energy of the band was flagging a bit. In fact, the set lost focus a few times during the evening; perhaps 90 minutes would have been a more appropriate length for the show.

But in contrast to the high-profile reunion gig I saw the Police do last summer, the members of Van Halen were clearly having a lot of fun onstage – which stood out most during the show. Eddie smiled constantly and looked ecstatic to be jamming with Wolfgang; the two played back-to-back on occasion, and the paternal pride he had for his son was clear. Alex, like most drummers, was in heaven just playing, especially on a seizure-inducing solo that kicked up the set’s energy after a lackluster, dragging cover of “Pretty Woman.” The blazing interlude let him utilize the arsenal of kickdrums in his mad scientist’s fortress-like setup. Roth and Eddie displayed little of the touchy relationship; they frequently laughed and joked around with each other, and during a segment where DLR made motorcycle-revving noises to battle Eddie’s supercharged riffs, Roth lamented, “I can’t compete with that!”

Bizarrely, the final song of the night, “Jump,” was the only true trainwreck. Roth started the song by donning a pirate’s hat and running around the stage waving a giant red flag, Olympic-ceremony style, a suitably epic gesture for the song’s epic synthesizers. However, these keyboards, guitars and drums never aligned at all, bogging down the song’s tempo and destroying any chance of cohesion. Still, the band soldiered on: Roth donned a Chuck Berry-styled captain’s hat – all aboard the S.S. Campy! -- before lugging a giant inflatable microphone around the stage, as confetti fell from the ceiling onto the crowd. It was the one song where spectacle overshadowed the music – and it stood in sharp contrast to the rest of the set, where Van fucking Halen just rocked out like the old days.

Setlist, courtesy of this blog: