Those expecting a grand piano on an empty stage at last night’s Alicia Keys As I Am tour stop at the Scottrade Center were mistaken; accepting Alicia Keys as she is only means yielding to legend. The concert included incredible lighting and stage production, weirdly fast costume changes, backup singers who could be professional dancers and one, Jermaine Paul, who is probably talented enough to make it on his own as a singer/songwriter.

Jermaine’s opening act seemed an embodyment of As I Am’s spirit; he stood alone with his guitar singing numbers he’d written himself. While not lyrically compelling, his songs were still good – and not coincidentally, I liked the ones that reminded me of something John Legend might crank out. Most impressive were “Talkin ‘Bout Love,” and notably, “Ready to Fall in Love” (both sampled on Jermaine’s MySpace page) which provided an instance when his gospel-influenced sound balanced the simplicity of sweetly hopeful lyrics.

It’s an understatement to say that I was less impressed with Ne-Yo.

It’s impossible to not reference a high school musical when talking about his set -- not the Zac Efron one, but “a” high school musical, the one you saw in a gymnasium or community center a few years ago, the last time someone you loved happened to be in high school. Even he had to concede that “[we’re] still working out the kinks” when he dropped his lead dancer on the floor. We’re not talking about a misstep here, but a swing-inspired dance move intended to culminate during a song instead crashed it. Mistakes happen, but this was consistent with the unprofessional glean of Ne-Yo’s production. While it didn’t ruin “Sexy Love” for me, it tainted it. 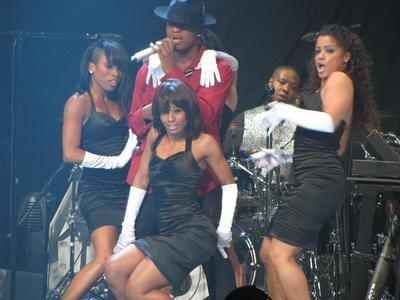 When Alicia Keys burst on the scene (literally, through an enormously pink-lit stage base), seated on a rolling grand piano playing the As I Am intro, a packed Scottrade center rose to its feet. Her luminary entrance set a magically realistic tone that she maintained throughout the show. She spoke to the audience between songs in the conspirational tones of a best girlfriend, enhancing the confessional feel of “Teenage Love Affair” and lending a congenial ingenuity to “Superwoman.” This song was prefaced with: “Have you ever just woke up one morning with the blues? When nothin’ seems to help? You try going out, partying, and that doesn’t work. You know what you have to do? You have to go back to yourself and do what you love. And this is a song I wrote for myself when I had the blues . . . and then I realized, this is a song for every woman.” The piano rolled again in the showstopping, cell phone-waving hit, “Like You’ll Never See Me Again,” when it dramatically disappeared into the stage as she finished the song.

It’s no wonder that, Regis Philbin-endorsed provocation aside, even our mothers have a natural affinity for Miss Keys. When my mom first absently mentioned, “I just love that Alicia Keys,” I burst out laughing. Although I’d always liked her music, it was the moment I conceded to her phenomenon. Keys isn’t like any other young female star of our generation. We don’t worry about parts of her showing up exposed somewhere. We’re not obsessed with her personal failings (there don’t really seem to be any), or over her tumultuous love affairs (see note on personal failings). We just gawk at her beauty and listen to her sing, assured of nary a lyrical mortification, and feel an indefinable sort of gratefulness that she exists.