John Roderick is now blogging on Mondays at the Seattle Weekly blog, which I just found out. So here's this week's installment, where he chats about how he got his start in music. 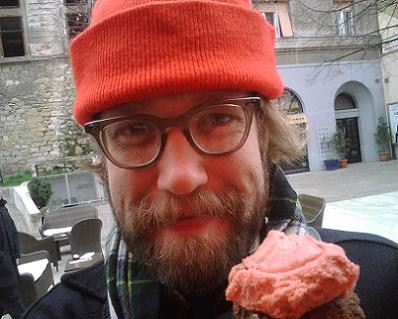 I arrived here in the fall of 1990 with no money and no prospects. Some kids I knew from Anchorage were renting a big house on the edge of the U District, with a half-dozen punkers squatting in their closets and kitchen cabinets, and I followed them home. They'd moved up from Olympia and their band, Motor Virus, practiced in the basement, along with the all-girl punk band Dickless and a newly arrived Tucson band called The Supersuckers. They had four Marshall stacks in a room just big enough for a washer and dryer. I shared a bedroom with a fellow Alaskan who made money by picking psychedelic mushrooms on the UW campus and selling them to frat boys. He slept on the single mattress and I slept on the floor with a rolled up sweater for a pillow. One afternoon I was loafing around the house when the phone rang. It was the promoter of the OK Hotel, looking for one of my housemates to work security at a DOA concert that night. I told him no one was home and he said, “What about you?” That was my first “music industry” job, crouching onstage at a DOA show with instructions to tackle stage-divers and throw them back into the crowd, where they were heading anyway. The singer, Joey Shithead, whipped out a chainsaw and started waving it around in full punk rock theatrical glory, before promptly cutting off the tip of his own finger. That show ended rather abruptly.