aPop Records Exhibits Its Wares at the Contemporary Art Museum

I think he meant a mix tape, really. The cassette, packed with a variety of songs and hand-written liner notes. She'd see that you love that Sheena Easton song, but your masculinity would be validated with the inclusion of that Judas Priest rocker (a twist of irony you would get a few years later). 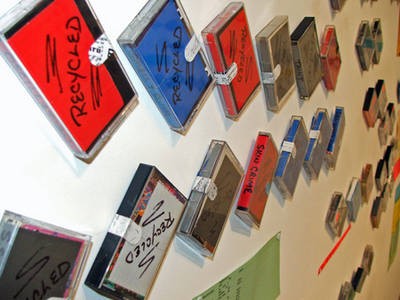 The cassette eventually tape gave way to CD-Rs and then to podcasts. Today, the cassette tape is pretty much dead in mainstream music. But the plastic cartridge still offers a medium that's appealing to artists and musicians. So much so, that musicians, far from being driven by monetary pursuits, still put out cassette-only releases (gasp!).

The local purveyor of such arty releases, Cherokee Street's aPop Records, exhibited some of its wares at the Contemporary Art Museum of St. Louis this week. The exhibit continues through Sunday, April 20, with a reception from 5 p.m. to 7 p.m. Saturday; "with booze," reads a MySpace bulletin about the event. Ask an aPop employee if she has an iPod, and you'll get a knee-jerk "fuck no" for an answer.

Check out some the finest works in the exhibit here: photos.