Concert Review: Feist and Hayden at the Pageant, Saturday, April 12

(Photos and review by Roy Kasten)

It’s been a rough week for Feist. First she endures the humiliation of taping “1234” for Sesame Street, a show so uncool even five-year-olds won’t watch it, then she gets plastered with a half dozen awards bearing the name of an insufferably cute indie movie, and given by her home country which isn’t a real country anyway. And to top it off, she gets fugged.

Sucks sometimes to be a pop star.

But star she is, as an almost-instantly sold-out Pageant show Saturday made clear -- or mostly clear. “What is the Feist?” a middle-aged couple asked me as the early entrance Halo Bar started to fill up. “Have you heard of YouTube? iPod Nano? The Juno Awards?” I wanted to ask. I didn’t. I was with my people, 99.999% white, mostly suburban (I live in the city but I can’t deny my roots), mostly 28 and up, of the comfortably positioned, college-going-or-been class, utterly and totally unhipster. Outside, a VW trade show seemed to have taken over the Metrolink parking lot.

Pre-show music included a few Beatles tunes and then the telling “Sinnerman” by Nina Simone. In the opening slot was fellow Canadian —- and one of Feist’s biggest youth crushes -— Paul Hayden Desser, a.k.a. Hayden, who started off with “Home By Saturday,” one of a hundred lovely small melancholy tunes in his repertoire. “In the cities that I'm playing,” he sang over old Gibson acoustic strums, “to the people I won't ever know.” Or in this case, to the people who won’t listen.

Midway through his solo set, with turns on the piano, harmonica and Telecaster, Hayden couldn’t take it anymore. “There will be a half-hour break before Feist comes on,” he admonished with resignation. “I’ve only been to Saint Louis two or three times, so if you could wait to talk until the break and maybe listen to the rest of my songs.” You have to feel for the dude, who was sensitive-indie-acoustic before much of the floor was born. The problem is, we’re an uncouth, rude, chatty people, and we don’t know who you are, and even if we did, we were too busy talking to hear you tell us to stop talking. A shame, sure, but a backing band and richer arrangements -- which he manages nicely on the new In Field and Town -- might have countered the collective attention deficit disorder.

Post-break, “Mr. Spaceman” by the Byrds presaged “the Feist,” who walked out to the dark stage carrying a lantern of some sort, crouched behind a paper screen, and sang and looped the intricate a cappella parts to the nineteenth-century hymn “Leaning On the Everlasting Arms,” her slender silhouette back-lit and projected as if by a child playing with a flashlight in a tent. The DIY light show continued through the night, with two members of her crew tracing figures with leaves, twigs and cut-paper across some over-head projector that sent them up to the vast white sheet behind the stage. Often the smudges and smears were artful; just as often they were smudges and smears. 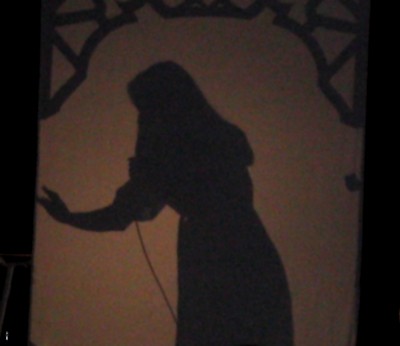 Much more fun was the swirling disco ball lights for her first full-band number, “When I Was a Young Girl,” a burning blues tune from the Odetta and Simone catalogue, but which Feist and band owned, with pounding hand drum percussion, keys and twin electric guitars, and a delivery that made her frequent citation of PJ Harvey and Simone as influences ring true. That kind of ferocity didn’t make Feist a pop star, but it’s hers when she needs it.

“Is it Saint Louissss or Saint Loueeee?” she asked. No clear answer, but she gave the big catsup bottle a shout-out (that’s in Collinsville, Illinois, Leslie) and her father, who hails from the area, and is the reason behind her dual citizenship. It’s hard to imagine this anti-diva in a lavender wisp of a cotton dress ever in less than a splendidly charmed and charming mood -- and though struck by a coughing fit just before leading the Pageant in a mass three-part harmony intro to the gorgeous “So Sorry,” she was in soulfully nuanced voice all night, her breathy alto a well of simple, sincere, unstudied emotion.

She’s a singer who just lets her self sing. Her charm depends on not ever seeming to try to charm. Saturday night, she was like the indie pop Laura Nyro who lives next door, and invites you over to hear a song she’s just written or hasn’t recorded yet. This evening it was a cover of Broken Social Scenester Kevin Drew’s “Fucked Up Kid,” which Feist couldn’t quite convey, partly because the song is too über-indie-cute -- the refrain “Oh shit, I’m in love with a fucked up kid” is pure pain -- and partly because her talent isn’t in lo-fi demo indulgence (her vocal looping microphone was wack-distorted all night) or even the too-easy hooks of “1234” (which she’s wholly sick of, at least judging by the way she rushed it), but in natural, never too clever arrangements and never too transparent melodies.

When the horns and piano kick in with some samba groove, when the band lifts together on “Feel It All” -- colorful spirals on the big white sheet echoing the fireworks from the genius video -- when the flute and kick-drum drive “Brandy Alexander,” and when she ends her encore with the stirring, funky Nina Simone revision “Sea Lion Woman” and the swaying, dream-jazz original “Let It Die” (with its simple and honest couplet, “The saddest part of a broken heart/Isn't the ending so much as the start”), Feist just lets the beauty of her music be.