Last Night: DJ Madlib and Egon at the Gramophone, April 10

Though it has been open just about a month, The Gramophone (4243 Manchester Avenue) in the Grove neighborhood played host to one of DJ'ing's biggest names on Thursday night – DJ Madlib. Though the show wasn't promoted on Madlib's MySpace page, a bulletin by his record label, Stones Throw (and a blog post here) alerted St. Louisans about the show. 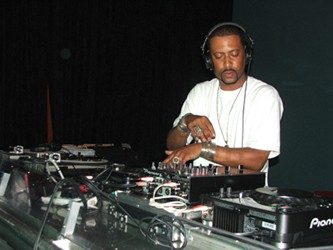 See pictures of the show, the people, the records, here.

Born to musician parents (his father, Otis Jackson, is a soul singer) in Oxnard, California, Madlib held court over the crowd. Most grooved to his jams, while the tech-heads marveled at his mix-and-scratch mastery. The prolific DJ – who has recorded under various names, including Quasimoto and Sound Directions – worked the near-capacity (350 people) crowd into hypnotic head-bopping until 1 a.m.

The admiration of Madlib's fans was evident when one local presented the DJ with a banner-sized, graffiti-styled, Sharpie-marker portrait of the DJ. He looked a little taken aback by the gift, but eventually the banner was hung behind him as he performed.

On tour with Madlib, opener Egon kicked off his set by playing something that most in the room likely had not heard: a 45 RPM EP by the Corvettes, a bygone soul band out of, you guessed it, St. Louis. Despite a few travel problems (flight turbulence), Egon was in true DJ form, getting the crowd to loosen their muscles on the dance floor. (Also helping could have been the alcohol that was flowing particularly strong.)

Local DJ's Needles and Crucial opened up the night with a dual mix of '90s hip-hop and soul. The pair's familiar choices of music seemed to acclimate the crowd – many who were at the Gramophone for the first time – with the new club, although Needles and Crucial are no strangers to the venue: They're the resident DJs on Thursday night, spinning this hip-hop/soul hybrid under the name Soundclash.