Explosions in the Sky at the Pageant, March 29: Video, Photos, Review

(Video by Will Jones; words and photos by Annie Zaleski)

As commenter Jeff weighed in below, it's tough to describe the experience of seeing Explosions in the Sky beyond "wow." The Austin instrumental quartet is no-frills: Its stage setup utilizes no videos or flashy props (beyond a Texas flag and moody midnight lighting) and the band kept stage banter to a bare minimum (read: a sincere, genial greeting before the show began). 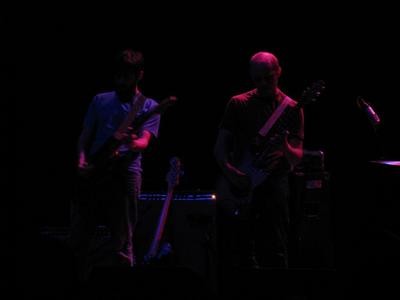 This lack of visual distractions means that the band’s hard-to-categorize music becomes the primary focus of its concerts -- which it was during Explosions’ very first St. Louis show, Saturday night at a packed Pageant. As it is on their albums, the band’s post-rock is the very definition of cinematic in person. (Think Sigur Ros, only with a lot less roar and a lot more time spent listening to Mogwai and American indie rock). The multiple-guitar attack created abstract musical moods best summed up by adjectives: watery, mournful, ferocious, blissful, distressed, lonely, calm. 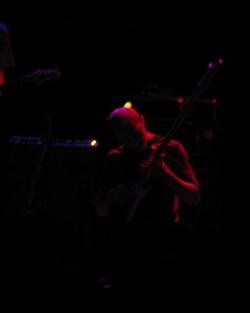 The cumulative effect was awe-inspiring and chill- (and tear-) inducing, sometimes achingly so. Explosions is the perfect concert during which to bliss out, to let emotion take over, to let life’s worries bubble to the surface in order to then float away. In short, the band creates an environment of emotional catharsis with its music. It’s challenging to the heart as much as it is to the brain.

The band members seem to find the same release as the audience, as their onstage demeanor was a visceral, physical experience. Multiple times during the set, bassist Michael James nearly ended up crouched down on the floor (see picture), as did guitarist Munaf Rayani. (The latter also grabbed drumsticks and shared percussive duties with Chris Hrasky on one song.) The three front-line players swung and crouched like jungle animals, creating a bizarre sort of interpretive dance recital.

By the end, the trio was almost punching its instruments like prizefighting boxers (see the clip above). It’s a testament to the intensity and emotion Explosions in the Sky pours into its music – and to the rushes of adrenaline and energy surging through both venue and band during this amazing show.

If you have a setlist, please post below in the comments.