Oppenheimer Live at the Bluebird, March 23

So, the Easter holiday scared off most everyone from the Oppenheimer show -- which is a shame, since the Irish duo was in fine form last night. Its Moog- and synth-laden music is somewhat akin to Air with pop sensibilities or a sunny Magnetic Fields; new songs from the forthcoming Take the Whole Midrange and Boost It are a wee bit heavier, but no less charming. (Also charming was Oppenheimer's stage banter -- I'm too tired to remember specifics now, but suffice to say all of it was funny.)

(click on Rocky O'Reilly's shoes to go to a slideshow!) 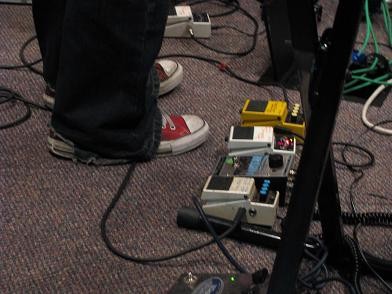 Other highlights include: *Drummer Shaun Robinson asked the crowd the origins of the name of the city of St. Louis. People actually knew. *The band admitted that during its first time in St. Louis, it blew an airhorn in Beatle Bob's face. Great applause ensued. (This isn't quite as shocking as it seems: One of its songs actually has an airhorn solo and it showed its appreciation for opening band Circus Window by blasting one several times.) *Plenty of excellent Vocoder vocal workouts from Rocky O'Reilly. *A song about Twin Peaks that went over grandly; new Midrange songs such as the barely-one-minute "Major Television Events."

If you want to find out what all the Oppenheimer fuss is about, tune in to my radio show, International Pop Overthrow, today from noon to two p.m. on KDHX. I had the band in for a session and an interview. They're charming chaps!

"Breakfast in NYC," live from the Bluebird last night: