Hot on the heels of a recent Associated Press story comes a whopping three-page profile on Beatle Bob in the April 2008 issue of Blender magazine. The entire article -- penned by David Peisner, who you might remember as the person who recently ticked off the Black Crowes by writing about their album for Maxim despite never hearing it -- is available online here. (Picture in this post courtesy of blender.com.)

The article is nothing we here in St. Louis haven't heard or read about before. (For reference, see C.D. Stelzer's 2000 RFT article, "Something In the Way He Moves.") Peisner follows Beatle Bob as he attends a Garrison Starr concert at Off Broadway and presents his occasional Thursday night shows at Lucas School House, and attempts to find out the real story behind Beatle Bob's life. 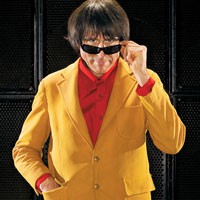 Key word being attempts: Like Stelzer's article, Peisner's story takes a neutral, non-accusatory tone when addressing the questions of whether BB has Asperger's syndrome (a form of high-functioning autism), is a social worker or is homeless -- instead preferring to let quotes and facts speak for themselves. A phone call to the Agape Academy debunks Beatle Bob's claim that he works there, while a visit to Beatle Bob's house proves to be false as well; a woman BB says is named "Alisa" and works for his uncle is, in fact, not named Alisa and has lived at the house for 37 years -- and doesn't know Beatle Bob.

What seems to be missing from the article...

...is the perspective of St. Louis musicians. (Joe Schwab of Euclid Records, Lisa Andris of the Hi-Pointe and Dan Jameson of Lucas School House are all quoted.) Granted, the story is for a national magazine, written by someone not from the area, so of course the tone will be geared toward a universal audience. But Bob's role as an iconic -- and wholly controversial -- figure in the local music community is downplayed, if not ignored. Go to any show and talk to nearly any member of a local band, and BB will cause some sort of strong reaction -- whether it's vitriolic, sympathetic or indifference. For every national musician that thinks it's great that Beatle Bob is at a show, you'll find two or three locals who just want him to leave.

Show-goers are even more outspoken. A story written by former RFT staff writer Malcolm Gay in August 2005 about the Web site Beatle Bob Sit Down! drew a flurry of letters, both in support of and against Bob. A comment left by "C" on Stelzer's article a full seven years after it ran says:

"When I pay to get in to a club to see a band, I'd like to see the band, not Beatle Bob's big head the entire show. Also, If they want to talk to someone about him being banned from record stores, talk to the old staff from the late 80's early 90's from Vintage, or West End Wax. Man has an excuse for everything."

I've heard scads of (mostly off-the-record) stories about Beatle Bob ever since I moved to St. Louis in June 2005. After reading the Blender article, my main reaction was sadness. The quotes justify or excuse Beatle Bob's eccentric behavior, thereby painting him as a figure to be pitied. It's akin to the the movie Mayor of the Sunset Strip, about Rodney Bingenheimer, an iconic, Beatle-haircut-sporting figure famous in Los Angeles. By the end of that documentary, Bingenheimer's loneliness is excruciatingly palpable. All he has is music -- and while it's certainly a sustaining force, it ultimately came across as unfulfilling.

Bob's life too revolves around dancing and music, which is an admirable thing, especially since it brings him so much joy. But Peisner never delves deeply into what makes Beatle Bob tick -- or ultimately gets a complete picture of his impact both in St. Louis and beyond.