In their eighth year, the Twangfest day parties (now co-presented by KDHX) have built their own momentum and following. (Full disclosure: I’m a Twangfest volunteer and KDHX programmer.) They’re always a South By highlight, and this year drew label reps from Anti-, No Depression honcho Grant Alden and NPR critic Ed Ward. It really is true you can go to Austin every March, skip the wristband or badge expense, hit the free shows all day long, and still see and hear more bands than ought to be humanly possible.

Down at Jovita’s Mexican restaurant on Thursday the line-up included Amy Lavere, Th * Legendary Shack Shakers, Deer Tick and St. Louis’ own So Many Dynamos and Gentleman Auction house; Saturday was the better-attended day, however, with the Waco Bros., Chuck Prophet, Kevin Gordon and Blue Mountain drawing ridiculous crowds inside.

I hung and “stage-managed” outside, where unknown-to-me alt-country band the Whipsaws (from Anchorage, Alaska) kicked off the afternoon with pure Bad Co. and Skynrd southern rock, then backed up Joshua Tree-based troubadour Tim Easton, who looked weathered in shades and graying hair. It’s hard to think of Easton becoming one of the wise old veterans of alt-country, but such is time, and Easton can still churn through Dylanesque blues as well as anyone of his generation. 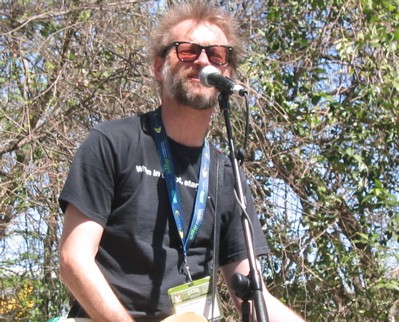 Tommy Womack followed, looking even more grizzled and more spaced-out than usual, and seemed just a little bit tired as he led his band through a 40-minute set in the sunshine. (As the weekend progressed, the climate in Austin just got sweeter and sweeter.)

Sacramento’s Christian Kiefer and band took their time setting up (apparently he couldn’t see his tuner in the sunlight), and though Kiefer’s Undertow debut Dogs and Donkeys gets by on poetic ambition, the meandering tunes don’t really translate live. Kiefer lost the crowd after about 10 minutes.

Jon Hardy and the Public:

But St. Louis’ Jon Hardy and Public, in their usual sharp suits, pulled the audience back just as quickly. This was the band’s first Austin gig, and they didn’t mess around. Even without the horn section so vital to last year’s Working In Love, Hardy delivered every song like it would be last time he’d sing them in the sun. 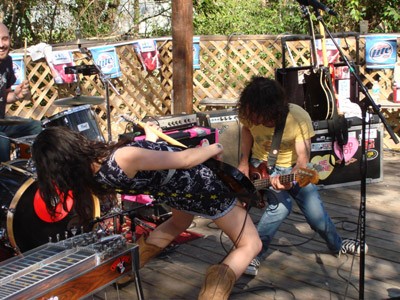 After a quick back-line changeover, Boston’s Sarah Borges & the Broken Singles quadrupled the crowd on the patio, churning through their slightly twangy pub-rock until a speaker cable blew in mid-set. After a failed attempt at an instrumental, Borges stepped into the crowd and sang-out sans microphone. The frazzled sound guy finally fixed the PA and she wound up her set with a smart Tommy Womack cover and a version of the Reigning Sound’s “Stop and Think It Over.” If the crowd had its way, she would have played til sunset.

From Nashville, Aaron Robinson (another Undertow artist; if you’re sensing a pattern here, thank Chris Grabau) followed as a last-minute add. Although only a handful of folks stuck around for his folk-pop set, he played with both wit and grace, even if it was rather late to get much, if anything, out of the tip bucket.