Though not without hazards, my Friday at SXSW wound up as revelatory as any day. After early party sets from the young and promising soul-rocker Black Joe Lewis and former country superstar Deana Carter (more about those over at Living In Stereo), I began the night at the Ale House (and no, they still have no ale), where I secured a couch on a balcony overlooking the small room (joint is the size of the average Soulard dive) for a Yep Roc showcase featuring the Golden Dogs, Heloise & the Savoir Faire and Liam Finn.

I’d heard the Golden Dogs (from Toronto) on record, but the psych-rock, smart as it seemed on my headphones, only took me slightly past the borders of Meh. On a cramped stage, however, they’re as wild, fun and unpredictable as a crate of bottle rockets tossed on a punk rock bonfire. Knowing they were largely unknown, they displayed song titles on cue cards and ripped through a great cover of Paul McCartney’s “Nineteen Hundred and Eighty Five,” keyboard hooks fully intact.

From NYC, Heloise & the Savoir Faire did their best to out-shtick even the ridiculous Tim Fite or hipster-clatter of Man Man or any number of shtick-rockers that sometimes seem to dominate SXSW, if not the universe. With two parasol-twirling geisha dancers (a guy and a girl), Heloise did a reasonable Donna Summer impression over the non-hetero club grooves, but pace the name, the band doesn’t know how to do much with said grooves. Aiming for the indie diva disco niche doesn’t give you a pass on originality. 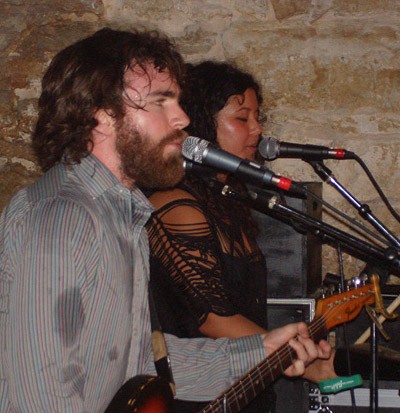 But I was hanging up in the balcony to see Liam Finn, son of Neil and father only to a good, little lo-fi, art rock record called I’ll Be Lightning. He’s 23, I gather, and his song constructing, drumming and guitar wrecking seem as spontaneous and carefree as they do considered and finely envisioned. EJ Barnes added delayed-out autoharp strums and spectral vocals as Finn leapt back-and-forth between drum kit and looped guitar, and what the set lacked in continuity, it made up for in heart, inspiration and some excellent circuit-bending freak-outs.

Just around the corner on the infernal Sixth Street, I spent a futile hour in line for the She and Him (a.ka. Zooey Deschanel and M. Ward) set at The Parish, but if badge-toting Britt Daniel barely got in I wasn’t going to make it. Back up was Austin’s alt-country band the Gougers at a posh hotel bar just up Congress (tip: if you’re going to do four full days of South By, schedule at least one venue a night with couches). They sounded just fine, if somewhat indistinct, covering moody-twangy originals and standards like “Wayfaring Stranger.”

The night ended with the druggie-surreal-folk of Joseph Arthur solo at the poorly a.c.ed Buffalo Billiards. Even if Arthur didn’t work the heroin rock star look to perfection, he’d still be some kind of icon, if only for the honest, uncynical mileage he gets out of his trips, whether good or nightmarish. And his $100 rosewood harmonica sounded like a bargain at twice the price. He covered the hits (“Black Lexus” and “In the Sun”), but it was a new song, “King of the Pavement,” that I hummed all the way back to my hotel at 2:00 a.m.