The Raveonettes, Land of Talk, Jens Lekman at SXSW

(Our Internet access has been down at the hotel; apologies for late posting!) RFT freelancer Roy Kasten is blogging from SXSW. For more coverage visit Living In Stereo. Raveonettes picture by Dana Plonka; Jens Lekman photo by Roy Kasten.

Having missed the Raveonettes by five minutes on Day One, I resolved to start Day 2 at the their gig at a free party at the Red Eye Fly. Sune Rose Wagner and Sharin Foo fought back the assault from Motorhead playing next door and the crackle of a blown channel for a true-to-record, low-gloss, blur-rock that sometimes sounded like the Sundays, sometimes like Loaded-era Velvet Underground. The back yard patio groaned under the weight of a triple capacity crowd. I’m usually fairly aggressive about weaseling forward—I’ve got stories to file, I rationalize—but decided to hang back, sip a free Dewar’s and ginger, and let the chime and buzz stream over me. 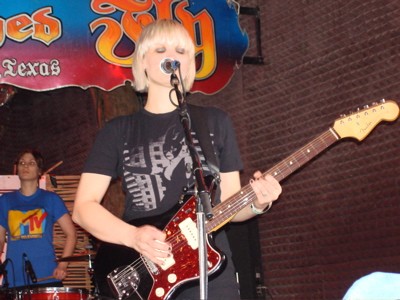 Afterwards, I headed way south on Congress for Trophy’s, a good pool hall and rock dive, where Land of Talk was loading in for another free day show. Apparently the blogs haven’t been exerting their power on behalf of this fine, power-poppy Montreal trio (though props to KDHX’s Darren Snow for spreading the word), as there were only 30 or so kids in the audience. Lead singer Elizabeth Powell has a fine, sweet moan and the good sense to run a Gibson SG into a Marshall stack. For the first three numbers their fingers and spirits seemed coated in some invisible paste, but they quickly warmed and tightened up, especially on the long, squalling, Yo La Tengo-ish tune “Yuppie.” Theirs was a sweet if never over-powering surprise of a set.

After some writing at Jo’s Coffee, with Lil Cap’n Travis paisley-painting “Wichita Lineman” in the San Jose Motel parking lot, and then dinner at Guero’s (always worth the wait), I headed back downtown for Emo’s and the first official showcase of the night: a solo Jens Lekman set. I’d seen photos of and heard about the Swede’s vestal virgin orchestra at Pitchfork fest, but never having caught him before (non-shocker: he’s never played St. Louis), I had few expectations. Dressed in a white tunic with embroidered roses, the frail, sincere singer stood with an electric guitar and no band in sight. “I have a request,” he said to the packed room. “If you could not video tape this show. I want this to be special, and it’s less special if a million people see it on YouTube.” Cue the applause and the sound of a hundred gadgets turning off. He opened with an a cappella cover of Scout Niblet’s “We’re All Gonna Die,” into a whistle-along take on the second catchiest tune from Night Falls Over Kortedala, “That’s No Way to Say Hallelujah,” and into “Postcard From Nina,” the sweetest, funniest and somehow saddest song from that record. There’s much to admire in Lekman: As savvy as he is with sampling and song construction, dude can play, knows his jazz and pre-war pop music melodies, and writes and sings as if every word counts. He could get by on fey affectation; he doesn’t. With just a clear tenor and clean guitar tone he makes his native Sweden, the towns of Kortedala and Gothenburg, become a kind of magically real, honestly felt Macondo. He dipped into pre-Kortedala material with the softly peeling “Black Cab” and then closed the set with his catchiest song “Bingo,” and the crowd singing “bomp, bomp, bomp” for every sentimental heart-beat. He pulled the microphone down and aimed it straight at his aorta: a tableau that needed no explanation.