This Band Could Be Your Life, Part II: So Many Dynamos Tours to SXSW

[In weeks leading up to and after SXSW, bands route their tours toward and away from Austin. One of these groups is St. Louis' own So Many Dynamos, a band whose spiky keyboard-rock, gnarled riffs and complex time signatures call to mind everyone from Q and Not U and Pattern Is Movement to Battles and Broken Social Scene. The quartet is playing a house party on Wednesday, March 12, and at 4:30 p.m. on Thursday, March 13, at the Billiken Club's stage at the Twangfest/KDHX party at Jovita's (1619 South First). Guitarist/Riverfront Times freelancer Ryan Wasoba was kind enough to keep a diary of the band's first few weeks on the road to Austin. Stay tuned for one more installment of his observations in the coming days.] 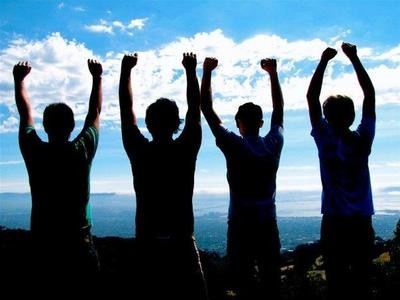 If the cops break up your house show in Laramie, Wyoming and some guy says "FUCK IT! Let's move the show to my house!" that means you pack your shit up and play at that dude's house. When the cops come to that show and break it up, the show is officially over.

There are at least three dogs at our show in Billings, Montana, and one of them is a total badass at fetch. He actually THROWS the fetched item back at you. We play an early show at a brewery that must be over at 8 and nobody can drink more than three beers. By following these rules, they don't have to get an actual liquor license. Montana people are like Colorado people with a heightened sense of Midwestern self-necessitated cool.

Missoula, Montana, is a strange college town nestled in between some mountains. It's beautiful, and they take much pride in some glossy magazine calling them a "top ten party town" in our country. We play with a band called Sharktopus, and unfortunately, they don't have shirts.

My favorite dog of all time is Miles, a shih-tzu that lives in an apartment in Spokane, WA. His roommate is a show promoter, lucky for me. I think we play shows there just to hang out with this dog. We are dog people. Spokane people are exactly like Montana people. Spokane and Missoula are also 2.5 hours away from each other across treacherous Idaho mountains. Everything in Idaho is somehow treacherous.

We play a shed in Bellingham, Washington, with mattresses all over the walls and a balcony. It looks like a place that Jimmy Eat World would shoot a music video in for cred. The cops almost bust this show due to a noise complaint. Apparently, the noise complaint was not for the show but for some kids drinking in their car and listening to metal very loudly. After the show, I witness a drunken disaster that involves V8. This is a first for me.

Seattle didn't intend to be cool, coolness just kind of landed on them twenty years ago and they've been trying to cope with it ever since. We play with Mahjongg, a band we love, and Calvin Johnson, who I had a hard time paying attention to. Our friend Robbie, who put out our last two albums and has subsequently wasted more money on us than anyone else, gives us the gift of a night in a Holiday Inn Express. Perhaps this makes me a bit of a hypocrite.

I hear Portland is cool, from cool people, but I have yet to see it. We eat fondue and drink beer with Rachel Demy, tour manager extraordinaire and ladyfriend of Chris Walla, which makes her our former babysitter. We spend the most money we've ever spent on the least amount of food. I take a quiz for my online Macroeconomics class, which I wish was a joke. Our show is very "eh," and we're constantly distracted by this fact: We must immediately leave our show and drive to San Francisco for a 10 a.m. load in. We must defy logic of time and distance to make this happen. Oregon is very foggy at night.

San Francisco is like a more overt version of Seattle; perhaps it's Seattle-meets New York. It's undeniably cool, but people tend to try slightly harder to achieve this level of cool. Perhaps it's more "cool upkeep" than anything else. We play a day show with the Mountain Goats for the Noise Pop Festival. As the room fills up, I realize that I should know way more about the Mountain Goats than I actually do. Yenie Ra is at the show. She is our good friend, and recently became our manager. It's nice seeing her in person.

We stay in Oakland with Sam Pura. He runs a studio and is recording Heavy Heavy Low Low, a band we once toured with. They want Aaron to sing on their record, so we spend a few hours writing a vocal part and recording it for the song. The record credit will read "Aaron Stovall appears courtesy of So Many Dynamos, LLC", because we're a business now. That's why we keep our receipts. On our way to the beach, I drive our van with the gas pump still in it, damaging the connecting hose, but that's old news now.

The next day we play a college show to college kids at the college coffee shop on a college campus. It's very college, and it makes us feel very old. We were college-aged when we started doing what we do, and now I feel very disconnected from these people. I am 24, sitting in a cafeteria that I snuck into, eating mashed potatoes and feeling very uncool.