R.E.M. Accelerate: An Advance Review and Song-by-Song Analysis of the Band's New Album

In honor of R.E.M.’s SXSW show on Wednesday, March 12, at Stubb’s (I’ll be there and reporting back), here’s a review of Accelerate, the Athens, Georgia, band’s new record, which is out April 1.

A friend posed an interesting question to me a few weeks ago: At what point in a band’s career is it impossible to evaluate its new album without referencing its back catalog? We were talking about R.E.M. specifically, although it’s a thought applicable to countless groups with lengthy careers.

That’s ultimately another essay in and of itself. But the question seems especially relevant, because early buzz around R.E.M.’s fourteenth studio album, Accelerate, involved the band nodding to the past. A five-night live residency in Dublin, Ireland, last July saw the trio sandwiching old, old songs it hadn’t played in decades between new material. Interviews have mentioned the record being faster than anything R.E.M.’s produced in two decades – which no doubt lead to the speedy title, Accelerate. 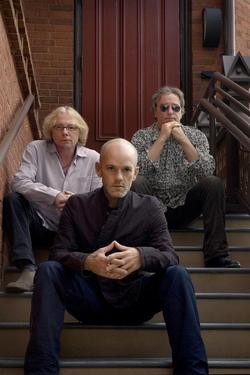 And yes, the album lives up to its name. It’s loud, quick and dirty, spinning by so fast that it takes multiple listens to sink in. It’s full of buzzing guitars and stream-of-conscious discontent, along with an abundance of Mike Mills’ choir-boy harmonies and sinewy bass.

But the overall atmosphere of Accelerate doesn’t resemble the mood of previous R.E.M. releases at all – meaning that you can’t exactly herald it as a return to form (whatever that means, anyway). Each R.E.M. album has a distinct personality and possesses a distinct atmosphere, even as it allows for variations in tone and texture. That’s the true genius of the band – and why its catalog remains so listenable: It’s adroit at finding cohesion in disparate, if not enigmatic or unorthodox, elements.

Sure, Accelerate's music itself hints at past eras – fuzzy guitars a la 1994's Monster; New Adventures in Hi-Fi's evocative pop; the dirty distortion and political yowling of 1988's Green; some orchestrated elegance circa 1992's Automatic for the People; the calls-to-arms of 1986's Life’s Rich Pageant; and the slick earnestness of 1987's Document. A friend mentioned that the music sounds like later-era Pearl Jam; to my ears, a few songs reference the raw crunch of Nirvana or the chaos of the Pixies.

Accelerate’s music is all of these things. But the album’s interpretations of the past are colored by experience, wisdom and, most important, time. R.E.M. isn’t a band full of rowdy college darlings or alt-rock weirdos anymore – and doesn’t seem interested in revisiting its quirky adolescence. Not to mention that it’s unfair to expect the band to be the cryptic poets they were in 1983.

What stands out most is that the band sounds like it’s having fun again. The previous three albums were meticulous, mannered and frequently moving – I stand by 1998's Up as a classic -- but often felt strained or out-of-focus. But on Accelerate, the music sounds effortless, crisp and breezy. If I have a quibble, it’s that the sequencing of the album in places seems off; the slower songs seem ill-placed, simply because the fast songs are so speedy in comparison.

Above all, the band has always made the album it’s wanted to make, at whatever time it’s wanted – with whatever messages it’s felt like conveying. Accelerate is no different. And so as a fan, I’m satisfied.

Here’s a track-by-track analysis. YouTube video links (if applicable) will be included with each. Also see the Web site ninetynights.com, which is posting a video snippet every day until the album's release.

“Living Well’s the Best Revenge” (YouTube). Peter Buck’s molten riffs race by, jangling through hyperspace at warp-speed. Vocalist Michael Stipe, his voice tinged with gravel and scorn, snarls lines such as, “Don’t turn your talking points on me / History will set me free / The future is ours.” He positively spits the chorus: “I’m not one to sit and spin / ‘Cause living well’s the best revenge.” The innocent narrator of the similarly styled 1986 song “I Believe” – the one who believed in “time as an abstract” – is twenty years older, and wizened from life. But he’s mad as hell – and isn’t going to let his youthful idealism die.

“Mansized Wreath” (YouTube). A song originally meant to be a B-Side, but elevated to an album track apparently after it was so well-received in Dublin. Deceptively jaunty garage-rock riffs have a bouncy, busy feel. Like on “Well,” copper-plated background harmonies from Mike Mills wind around Stipe’s off-the-cuff choruses. Think Guided by Voices or the Pixies.

“Supernatural Superserious” (YouTube real video; live version). I’ve talked about this song already here; it hasn’t grown tiresome after repeated listens. But in context with the album, it almost feels like it should have been the first track. Glossy and instantly memorable, it’s a classic R.E.M. single. (Especially because I still have no idea how to parse the summer camp/loner/ghost metaphors throughout.)

“Hollow Man”. Far and away my favorite song on the album. The song fakes out listeners at first, as it begins with beatific, somber solo piano and a vulnerable Stipe gruffly singing, “I’ve been lost inside my head / Echoes fall on me.” But waves of crashing riffs suddenly arrive on the chorus, signaling the narrator’s horror that he’s become a “hollow man.” The happy-ending sequel to Up’s “Sad Professor” lyrically, the song ends with the plea: “Believe in me, believe in nothing / Corner me and make me something.” Confident bursts of jangly guitar ebb and flow from restrained to loudly triumphant, mirroring the narrator’s wild-eyed regret at his life – and his burning desire to transcend this feeling.

“Houston”. (YouTube) Another favorite, based on acoustic guitar. Frowning organ and a stern low end curiously conjure a steamship whistle. The tempo also sways like that of a ship at sea; one can imagine brave captain Michael Stipe singing these lyrics while keeping lookout. The kicker is at the end of the song, though. After lyrics brimming with nostalgia and wistfulness about cities in Texas, Stipe sings: “Belief has not filled me, and so I am put to the test.” Cursory interpretation is that being agnostic or an atheist in our country’s political climate – and in particular, Texas – is emotionally trying.

“Accelerate”. (YouTube) My second-favorite song on the album. Reminiscent of Monster’s “King of Comedy," due to its urgent tempo and buzzsawing, minor-key guitar clouds (which often fade out in a trail of distortion). The sense of clawing panic in this song is palpable: “Where is the ripcord, the trap door, the key? Where is the cartoon escape hatch for me?” The atmosphere careens like a hectic pinball game, signaling that there’s no time to hesitate or think things through; action based on raw instinct is imperative.

“Until the Day is Done”. (YouTube). A quintessential thoughtful R.E.M. ballad, one earnestly wringing its hands over the state of the country. Beat-poet percussion meshes with fluttering acoustic guitar. The lack of vocal effects on this song means that Stipe’s vocals bleed with (and for) humanity.

“Mr. Richards” . (YouTube) Droning, lazy riffs spiral and dip in the background; think the Velvet Underground & Nico, or a kite soaring through the air. Stipe’s vocals are drenched in effects, giving the song a vaguely robotic tone. The coolest part: A few drum parts push forward into a quasi-drum-‘n-bass motif that’s an intriguing diversion from the relatively straightforward 4/4 beat.

“Sing for the Submarine.” A distraught, macabre waltz possessing a sense of floating anxiety and unspecified dread. With its greyscale guitars and melancholy minor key, the song feels like an outtake of 2004’s Around the Sun. As noted elsewhere, the lyrics seem deliberately self-referential: “electron blue,” “gravity’s pull” and “high speed train” all appear. The dank percussion breakdown/drum solo in the bridge is something I wish appeared more. Probably my least favorite song; it needs an editor, as there’s too much repetition to keep its elements interesting.

“I’m Gonna DJ” (YouTube). We haven’t had a “silly” song on an R.E.M. album in awhile (see also: “Shiny Happy People,” “Supeman”). And this is it. First debuted on the 2004 world tour, in the studio the song is all glittered out, T. Rex-style. Like a metallic glam-robot, Stipe speak-sings lyrics such as, “Death is pretty final/I’m collecting vinyl/I’m gonna DJ at the end of the world!” Falsetto background vocals gleefully shriek “whoo!” behind clunky garage-punk riffs. But among this noise and clamor is a glorious truism: “Music will provide the light you cannot resist.”