Arcade Fire's Will Butler Got Married in St. Louis

Aww, how adorable. Congratulations to Will Butler of the Arcade Fire and Clayton's Jenny Shore, who were recently wed in St. Louis. From the Ladue News:

Hometown girl Jenny Shore (Clayton class of '99) recently tied the knot with indie rocker Will Butler of the Montreal-based band Arcade Fire. The ceremony took place at Holmes Lounge, on the campus of Washington University, alma mater of Jenny’s parents, Dr. Bernard and Bea Shore. Jenny and Will met as undergrads at Northwestern University. The fun-filled reception was at Ninth Street Abbey, where guests danced to the zydeco strains of Gumbohead and were treated to an impromptu performance by Arcade Fire, whose 2007 CD, Neon Bible, has been nominated for a Grammy as Best Alternative Rock Album of the Year. 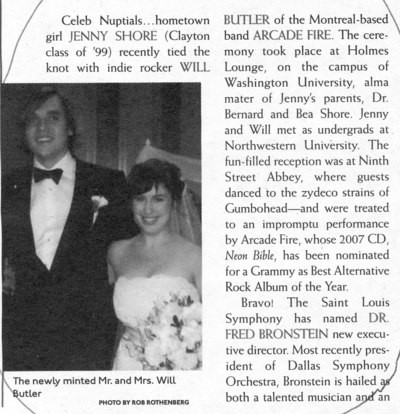