Jaime Lees had a lengthy conversation with Ian MacKaye to preview his show with the Evens this Monday night at White Flag. (The show starts at 8:30 p.m., tickets are $5, and the address of the venue is 4568 Manchester Avenue, just off of Kingshighway heading toward the Grove.) MacKaye, of course, was also in Minor Threat and Fugazi, so he's had a long relationship with St. Louis, touring and music in general. Here are some outtakes from the piece, along with an MP3. (Photo by the Evens, copyright 2007.)

I really love St. Louis, actually. I’ve been there numerous -- many times, actually. I was first there as a child in 1974, I think, um, I spent a few days there. My mother had -- my parents had friends there and, uh, I really remember being struck by St. Louis inasmuch that it really reminded me a lot of Washington.

I’ve heard that. In the residential area.

Yeah. I mean, whatever, not the federal city here, not the stuff that most people see or they think about when they hear the word “Washington D.C.” but the actually, the sort of the neighborhoods. Yeah it was really, I remember being struck by that. And, um, Fugazi... Minor Threat…See I don’t think Minor Threat ever played St. Louis but Fugazi certainly played there a number of times and, um, it was really, um, I’ve always liked the town. The shows sometimes were a little nuts- we had some pretty crazy shows there.

Right. You had a pretty jacked-up punk scene there [laughs] but by and large, they’ve always been great gigs and the people have been swell. 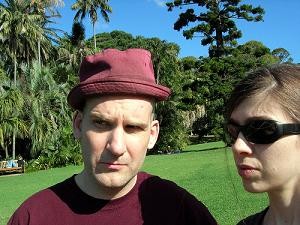 What else are you getting done on the road, do you know what I’m saying? ‘Cause I imagine that your life is a lot of, sort of, returning phone calls and what have you -- are you just driving and talking and scheduling? No, as a matter of a fact, what I like about going on the road is that I don’t talk on the phone that much. I don’t rock the cell phone that -- you know, I have a cell phone but it’s like “Hey, I’m lost, where is this place?” But I just don’t do business on the phone like that, not when I’m driving. In fact touring is, in some ways-- I mean, you’re a writer, yes?

Right. So you know when you start writing and you kind of go into your work and then like, the rest of the world is sort of off for a little while?

Definitely. That’s touring. it’s just my work The rest of the world is essentially, like, I don’t need to return all of the calls. I’m doing my work. I’m not doing THEIR work, I’m doing MY work. I just do it. So I think the driving… essentially, Amy and I work factually. Amy and I just drive, just the two of us, in the minivan with all the gear and we just drive around together. And we’re -- we roll well. We’re very…we spend a lot of time together so it’s totally pleasant and we just drive and we set up our gear, we get some food, people come in the room, we play music, we tape the stuff down, we talk to people and then we go sleep somewhere and then we get up and do it again. It’s nice.

How long can you do what without, like, are you ever going to burn out on that? Do you know what I’m saying? Like do you have a maximum? Do you want me to? [laughs]

No! I’m just saying- is it just not tiring to you because that’s what you do? I don’t think about stuff like that. um.... I have been tired, certainly. And Fugazi tours were really, in fact, they could be exhausting -- not just physically, but spiritually. Just because of the kind of carnival of the whole thing was so intense. Just so many people and, like everywhere you go you have to deal with all sorts of, all kinds of weird... we were engaging an industry that we had been at odds with. We had to really mind not just our business, but theirs, so that can be really, you know, overwhelming. Every time if you come into a town you have a venue where you have, like, 2500 tickets sold and it turns out they’ve been charging like a dollar [per] head service charge without telling you, that’s a bummer, you know?

Right. And that’s the way that industry works. They’re largely, not all of them, but largely they just can’t understand the way we do things but by the nature of Fugazi’s structure, we didn’t have any other way to present the music. We had to be mindful of the fact that if you have a thousand or two thousand people, you can’t just stick them in a like, in a [you] know, barn somewhere. You’ve actually got to be in a venue that’s gonna be a safe place for them. So there was a lot of…that was exhausting, that kind of stuff. Having to deal with a lot of that industry stuff was just so discouraging for me, because it’s just a world that, you know, I dealt with because I had to. Um, whereas in this case, it’s much more organic. I guess I don’t feel ever burned out at all I just feel fortunate to be able to go play music.

I think with the Evens, what we aim to do is to make shows with people. Like, we’re not going to play a show with people, we’re going to make a show with people. And we recognize that, you know, if the two of us, you know, just get up and start playing our songs, if the people aren’t in the room, we’re practicing. But if people are in the room, the energy of those people has a direct relationship on the music. And that energy. And that creates within us, like, a response. Hopefully that comes through in the music, which affects the audience, which inspires us, which… that’s a show! That’s a show. And we make music together, collectively. The band and the people. Thats a show. And I think the idea of these gigs is to really accentuate what a show is. An actual show, is that, like, naked kind of exchange of like people in a room together, um, essentially, being vulnerable with each other. Taking a chance.

How to you feel about when people shout requests or whatever? Depends on how they shout them, you know.[laughs] I mean if somebody gets there and starts yelling for songs by another band and they continue to do it, well, if they’re calling for a Warmers song, it might hurt my feelings because I wasn’t in the Warmers. And if they’re calling for a Fugazi song, it might hurt Amy’s feelings cause she was not in Fugazi. We know that. I assume the people who are yelling for the songs, they know it. I don’t know why that would be acceptable. But if they say “Hey, will you guys do this?” fair enough, you know. But I mean, if they call for Evens songs, that’s nice, I’m glad they know our songs.