On Monday night, the good news was that the Creepy Crawl was selling liquor again. The bad news was that it's still the Creepy Crawl. The bigger space in the Grand district has provided bigger opportunities for suck -- and pseudo-punk rockers are nothing if not opportunistic. Sound harsh? You probably weren't there for the 57 opening bands, or maybe you just like drinking vaguely chilled Busch out of a can while a parade of nobodies going nowhere fuck off on stage until the band 150 or so people paid to see winds up with an 11:30 p.m. start time.

All of which is dismissible, given that the club did book the Detroit Cobras at a fair price of $12, and the bartenders hustle, and the AC worked, and the crowd was only fifteen percent assholes. What's not dismissible is sound. Music -- even emo, screamo, primitivo, whatever -- really is sound, not attitude, and a rock club this size needs a PA marginally more tuneful than a Shop Vac. My Saturn has meaner woofers. I'll park it back stage next time. Couldn't hurt the flat, drab, muffled murk of the typical Creepy mix. 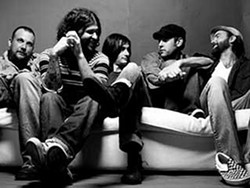 And maybe that's why Rachel Nagy and Co. came off a little stiff, a little shackled and listless, at least for the first half of their sub one-hour set. Or maybe it was the pathetic nothing-to-show-offs stripping off their shirts and shimmy thrashing in front. Or the chumps and chumpettes yacking twenty feet from the stage about horse tranquilizers, tattoo concepts, Norton Records and how cool it would be to stay sober for two days. The abject uncoolness of a space can take a toll on the coolest of bands.

The Cobras are cool—because they know more about this shit, this music, than you or I do, and they carry no pretense about it. Under a porkpie hat and furls of Camel smoke, Nagy barely introduced songs, never name-dropped a songwriter or original artist or year -- which at least gives me (and one blogger) a purpose in life.

Starting off with a mic check medley, they bashed out the baby songs, including "Baby Let Me Hold Your Hand" (Hank Crawford) and "Baby Loves a Secret Agent Man" (The Olympics), into the increasingly soulful "I'll Keep Holding On," (The Marvelettes) and the impossibly obscure piss-off-sucker "Laughing At You" (The Gardenias). Up through "Cha Cha Twist" (probably written by Hank Ballard), the band seemed to be looking for their own sound, their own feel, with these two minute blasts of love and lust, a feel their records have never left in doubt.

On stage, Nagy's voice has more of a country-lilt at the edges, a tenderness (you read that right) towards the material that belies her let's-get-vodka-drunk-and-fuck-on-the-floor charm. She's a singer who actually cares about what she's singing—whether it's some forgotten Atlantic shellac or a Little Willie John kitty tune or Sister Rosetta Tharpe gospel thumper—and her band, featuring Mary Ramirez on chunky guitar and infrequent meowling back up, gets the same investment across by just embodying equal parts hard rhythm and harder blues.

The idea that their covers surpass the originals sounds plausible until one actually spends real time with the originals. The Detroit Cobras have. And, despite a too short set, it showed.