Polyphonic Spree at the Pageant, August 4: That's Them in the Corner, Finding Their Religion

For a band that tries to play down its cult reputation in the press, (the comet-worshipping type, not cult classic kind), the Polyphonic Spree does little to dispel that image with its live performance. So much so that after frontman/high priest Tim DeLaughter dedicated the second song of the set to Hare Krishna, I became suspicious that the bartender was going to offer me a free Kool-Aid sample to accompany my gin and tonic.

Thankfully, the spiked punch never came, but in its stead the Spree offered what I suspect was a much more subtle programming regimen, consisting of two-plus hours of confetti, strobe lights, existential video projections and songs with uber-happy lyrics such as, “I am so excited and delighted today,” and “Hey it’s the sun, it makes me smile.” 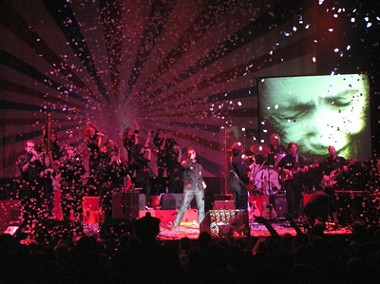 The Wu-Tang Clan of indie-rock, the band’s line-up occasionally tops out at nearly 27, but on this occasion they apparently left the Theremin player at home, and settled for a spare 21-person set-up, which included: a flautist, a harp, a three-piece horn section and a six-girl choir complete with choreographed hair-flicking moves. The result was some positive vibes and the equivalent of a rock-out competition, with each black-jumpsuit-clad member trying to set themselves apart with their own eccentric moves.

The pinnacle of the set was a cover of Nirvana’s “Lithium” -- chosen, I suspect, for its lyrics: “I’m so happy cause today I found my friends…In a daze cause I found God,” which incited the crowd to break into a no-contact, good-natured moshpit.

After a break, the band returned clad in its trademark white robes for a lengthy encore, kicked off by “Light and Day,” and followed by several songs by DeLaughter’s previous band, Tripping Daisy. The line-up also swelled to 22 as the band was joined on stage by DeLaughter’s elementary-school-aged son, who banged on an un-mic-ed snare drum while wearing a creepy, MF Doom-style mask. The kid managed to provide a good laugh as, between songs, he took the mic from his dad and described the difficulty of seeing out of the mask since he started sweating.